At the onset of Pride month, Gala Pride and Diversity Center's office sign was stolen and discriminatory documents were left on its front door.

Someone ripped down Gala's sign between May 30 and June 2, and the papers were discovered on June 5.

In response to both actions, community and partnering organizations showed their support for Gala. 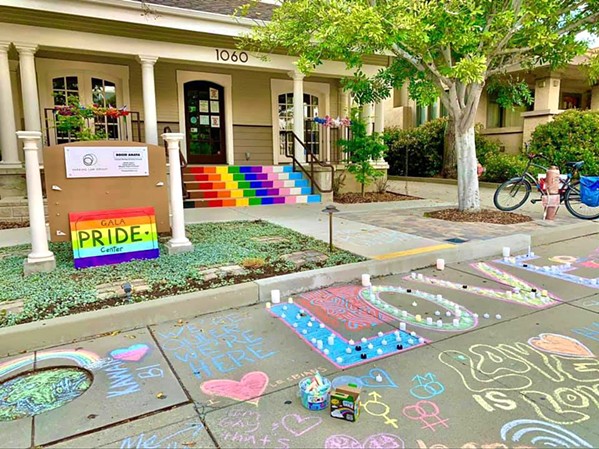 Declan Galli is a member of the Central Coast Pride Organizing Committee and a sophomore at Cal Poly. He said the committee was having a small meeting at the Gala Pride and Diversity Center on June 5 when two committee members noticed two pieces of paper taped to the front door of the office.

Someone handwrote the words "public knowledge notice" on the papers, and the printed text suggested a connection between being LGBTQ-plus and mental illness.

"It was definitely scary to hear and see in the moment," Galli said. "I think the message is just trying to terrorize and scare our community and really kind of be a power play."

Galli and a couple of friends took it upon themselves to organize a vigil in solidarity with Gala and the LGBTQ-plus community the following day, June 6, called, "We are here, we are queer."

"We really wanted to show that there is power in the LGBTQ community here, and we're in this community," he said.

The other goal of the vigil was to show those who aren't necessarily out about their gender or sexuality or who are living through stages of their coming-out experience that there are people who support and love them.

Vigil participants decorated the sidewalk in front of the Gala center with colorful chalk art and messages of love and support.

"There's a lot of homophobia that exists in this county compared to the Bay Area or Los Angeles, but the Gala Center and the queer community in general are really strong in SLO County, so that's been really great for me to see and makes me feel welcomed," he said.

New Times reached out to the San Luis Obispo Police Department for comment but did not hear back before press time.

Gala's $684 office sign was less than two months old before it was stolen.

Since then, the community has donated nearly $6,000 to the organization, $1,500 of it coming from Skipper's Brew Coffee House in San Luis Obispo.

Coffee house owners Karen and Shari Rubino said they made a choice to donate one day's worth of sales to Gala because the center has supported their business and they are part of the community affected by the vandalism.

"We are all a part of the SLO community and need to have each other's backs," they said.

Call said the donations will go toward a new sign and safety measures that include security cameras and outdoor lighting.

"I think this is a 'can't stop, won't stop' situation. We know that we need to support people and we know discrimination still occurs," Call said. "People need protection, they need community, and they need Pride month."

"I honestly feel like our profile is up because we just did our Pride activities, it's Pride month, and we have become more visible in the community over the last several years," Call added.

Gala encourages anyone impacted by the incidents to reach out to get support.

"We're here, and we're not going anywhere. We have your back, and I think we're a safe space, we intend to continue being a safe space," she said. Δ