Company once again accused of causing death of a disabled person

A  company that provides services to developmentally disabled individuals is facing its second wrongful death lawsuit in three years, according to documents filed in SLO County Superior Court in late February.

The company, Novelles Developmental Services Inc., faces allegations of negligence in the September 2015 death of 32-year-old Santa Maria resident Shane Alex Castro. Novelles, which has office locations in Grover Beach and Santa Maria, was providing in-home support services for Castro at the time of his death. 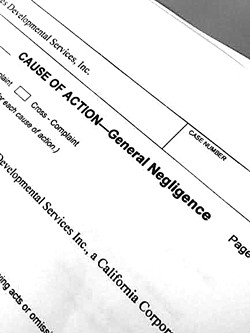 According to the lawsuit filed on behalf of Castro’s mother, Castro suffered from a significant autistic disorder, a moderate intellectual disability, and a swallowing disorder that previously resulted in three separate hospitalizations for pneumonia. He was also unable to communicate verbally, making him vulnerable to an injury due to lack of proper care, according to the lawsuit.

The suit states that Castro was attending a program at a vocational training center, where the staff noticed he was feverish and lethargic. The center’s staff reportedly contacted Novelles and warned the company that Castro needed medical attention. But the lawsuit contends that the unnamed Novelles staff failed to seek that medical attention. Castro’s lungs filled with fluid, and he died days later in his home. Castro’s death certificate confirmed that he died of acute bronchopneumonia.

“Novelles had a duty to obtain medical attention for [Castro] in light of [his] inability to verbalize any complaint, his diagnosed swallowing disorder, and his prior hospitalization for pneumonia,” the lawsuit, filed by local attorney James Murphy, stated. “Novelles negligently failed to obtain medical attention for [Castro] at any time after being put on notice of [his] need for medical care.”

In addition to accusing the company of negligence leading to Castro’s wrongful death, Murphy also accused Novelles of failing to properly hire, screen, and train its staff.

Similar allegations were levied against the company three years ago. In 2013, Novelles lost a multi-million dollar lawsuit after a SLO County jury found it responsible for the death of a 33-year-old woman, who also died in the company’s care.

That lawsuit stemmed from the June 2010 death of Lauren Arcady. Arcady, who suffered from a developmental disability and schizophrenia, died during a struggle with the company’s caregivers in her Santa Maria home. According to reports in the SLO Tribune, Arcady’s caregivers restrained her in a dangerous prone position during the struggle, causing her to suffocate. Murphy, who represented Arcady’s family in the lawsuit, also argued that the woman’s caregivers weren’t trained in CPR and didn’t attempt to resuscitate her.

After a six-week jury trial in 2013, a SLO County jury found Novelles, which operated as Genesis Developmental Services at the time, was responsible for Arcady’s death. The jury awarded $7.7 million to Arcady’s parents, according to court records.

As of March 8, the company had not responded to the lawsuit in SLO County Superior Court. An official from Novelles’ regional office said they were not aware of the lawsuit, and could not discuss the personal health information of any individual the company serves or has served due to federal privacy laws.

The lawsuit against Novelles marks the second time in less than six months that a company charged with providing services for disabled individuals in SLO County has been sued. In December 2015, the mother of a severely autistic Cayucos man sued ResCare Homecare, alleging that one of its caretakers attacked her son.