A classic trash-or-treasure conflict is simmering in Santa Margarita. After neighbors' complaints, SLO County code enforcement officers are cracking down on residents who keep too many non-running cars in their yards. 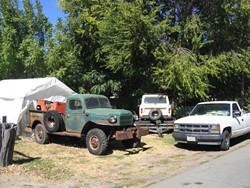 # To I Street homeowner Ken Slusser, the enforcement action is a violation of what he calls his constitutional rights as a hobbyist who collects historic military vehicles. To Chief Investigator Art Trinidade, the clean-up orders are a way to protect the neighborhood from unsightly clutter.

Slusser's front yard acts as a parking lot for his collection of old vehicles awaiting restoration, a stark contrast to his neighbors' neatly trimmed lawns and orderly flowerbeds.

"L.A. is pushing up here, and now you've got a clash of country and city," Slusser said. "Country folks have always liked the fact that it's not a country club here in Santa Margarita."

The vehicle collector said he's facing a fine of $2,300 because the county code allows no more than two vehicles to be stored outdoors at each residence. A vehicle is considered "stored" if it's parked for more than 48 hours.

"Everybody in town is in violation by Monday morning, if they haven't driven anywhere over the weekend," Slusser noted.

Trinidade agreed that many people have cars they keep outside and don't use every day, which would technically be considered "stored."

"But with Slusser, it's not 48 hours it's several years," Trinidade said. "When it starts affecting the neighborhood character, it depends what the neighborhood wants. Everybody's entitled to their hobbies, but it shouldn't affect others. There are hobbyists all over the county who build cars and don't affect the neighbors, by keeping their cars under cover or making sure their neighbors are comfortable.

"In Santa Margarita, there are very few complaints. It's a quaint community, and people tend to tolerate each other's idiosyncrasies. But Slusser has gone way beyond what's tolerable, with vehicles spilling out in his front yard and back yard. It has a very real effect on the neighborhood, and on real-estate prices," Trinidade added.

County code enforcement officials usually act only when there are complaints, Trinidade said. However, they now are involved in what he called "proactive code enforcement" as part of the Neighborhood Preservation Program underway in Santa Margarita, Oceano, and San Miguel.

"Anything we can see from the street is fair game. We try to work with people to get voluntary compliance. We want to lower the threshold of acceptance of nonsense," the chief investigator said, adding, "The county has changed culturally."

Slusser said that he's fighting the code enforcement action with the help of his lawyers.

"The first step is to get the code to fit the community," he explained. "A one-size-fits-all code doesn't work. The county code doesn't distinguish between junked cars and restoring vehicles. It's a Napoleonic law, where you have to pay up the fines up front, before you can appeal.

"I'm sure it's a problem for all car collectors," Slusser added. "We're part of living history, trying to keep military vehicles running. I told my neighbors to be thankful it's just trucks in my yard, not tanks."

Clean-up orders were also issued for two rural properties outside Santa Margarita, where an excessive amount of vehicles were stored.

"They were both pretty severe cases," explained Harley Voss, code enforcement inspector for the North County.

"There's a reasonable cause for saving stuff for when you might need it, but you have to know the limitations, and know it can snowball," he continued. "We turn into a kind of care counselor to help people work through this, but if there's no sign of willingness to voluntarily work on it, we submit it to the court and it's out of our hands."