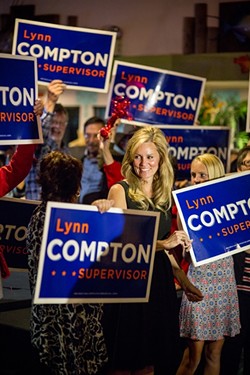 The letter was based on a May 20 complaint filed by Nipomo resident Ed Eby, who alleged that Compton failed to disclose the cost of several vehicles and trailers that she’s used as “rolling billboards” for her campaign.

“Your actions violated the [Political Reform Act] because you failed to report on your campaign statements the value of the use of a truck and a trailer from your business that contained political advertising supporting your election,” wrote FPPC Enforcement Division Chief Gary Winuk in the Sept. 2 letter. “However, since you immediately amended your campaign statements when contacted by this agency, we are closing our file on this matter.”

Compton had previously disclosed a total contribution of $10,572.12 for just “truck,” “vehicle,” and “trailer” wrap, entirely donated by her husband, Pete. Between the beginning of 2013 and June 30, 2014, Compton has now disclosed a total nonmonetary contribution of $24,886.38 (half from Pete and half from herself) for automotive wrap as well as newly tabulated “monthly trailer and vehicle costs.”

When informed of the outcome of his complaint by New Times, Eby said he was “glad the Compton campaign finally decided to follow the law.”

The FPPC letter explains that the California Political Reform Act requires campaign committees to report the value of any goods or services received by the committee at no charge or at a discount from the fair market value—often referred to as “nonmonetary” or “in-kind” contributions.

When previously contacted by New Times in May, Compton characterized Eby’s complaint as “a frivolous game” and added that it was “without merit.”

In a Sept. 3 statement emailed to New Times, Compton wrote that “nothing was ever hidden in the finance reports,” and claimed the FPPC has “expanded their reporting requirements.”

“As requested, with the FPPC’s newly announced standards, my campaign will continue to report the fair market value of the contributions made by my husband and I with the use of these vehicles, as we will continue to use them for both business and the campaign,” Compton wrote.

When reached for comment, FPPC Communications Director Jay Wierenga said the commission stands by their letter stating that Compton violated the Political Reform Act. Wierenga added that all candidates have to abide by the same law, and denied there is any kind of newly announced or expanded FPPC reporting requirement.