In the two years that Sheila Kearns has owned her boutique chocolate shop on Marsh Street in downtown San Luis Obispo, she's yet to experience normalcy.

When the shop first opened in 2019, construction work on Hotel Cerro next door disrupted foot traffic and business. Then, in 2020, the COVID-19 pandemic hit and upended life as we knew it. 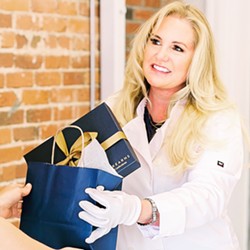 "There was a one-two punch for us," Kearns told New Times. "For our first year in business, we were totally blocked by construction vehicles. ... During the first lockdown [for COVID-19], there was no one walking around SLO. It was just absolutely dead."

Weathering that two-year storm was made possible in no small part thanks to a $31,000 forgivable loan that the shop received through the federal Payment Protection Program (PPP)—a fund created by the CARES Act to help small businesses and jobs during the pandemic.

So when Congress extended the PPP for a "second draw" this year, Kearns naturally applied. That's when she found out that her unique, topsy-turvy business history was actually going to act as a barrier to more relief.

In new eligibility requirements for a second PPP loan, businesses have to demonstrate revenue losses of 25 percent or more between 2019 and 2020 to qualify. The purpose of the rule was to target the PPP relief to businesses most impacted by COVID-19—a response to criticism directed at the first round of PPP for having next to no barriers to entry, which resulted in large and even publicly traded corporations receiving aid.

Since Kearns and her chocolate shop had such a dismal first year of business in 2019 due to the construction, Kearns said she couldn't prove the year-to-year plunge in revenue that was required. In reality, though, both years were exceptionally bad, Kearns said.

"Our first year was so artificially low. ... We couldn't show that 25 percent [loss] in any quarter because of our historicals," she said. "If we had a normal 2019 and the Cerro Hotel wasn't here, we may have shown the dips that we needed.

"There are no exceptions," Kearns continued. "Our banks tried. Everybody is getting funded, and we can't qualify. It's pretty brutal."

According to Jim Dantona, CEO of the SLO Chamber of Commerce, Kearns isn't alone. While PPP has helped hundreds of local businesses, nonprofits, and their employees stay afloat during COVID-19, the new parameters for the second draw are causing others, like Kearns', to fall through the cracks.

"That's where there's been a little bit of a hang-up," Dantona said. "Some people are at like a 22.8 percent revenue decline—within a percentage or two, and yet, not being able to qualify. Twenty-three percent is just as bad [as 25 percent]."

For that reason and others, far fewer businesses overall are participating in the second round of PPP than the first round, according to Janet Silveria, president of the Community Bank of Santa Maria. Under the federal program, banks like Silveria's are administering the loans, while the Small Business Administration (SBA) funds them and oversees eligibility.

According to the SBA, the PPP fund has about $68 billion remaining in it, with a final application deadline of May 31. In all, the SBA has handed out nearly 4 million PPP loans worth about $224 billion across the country.

In recent conversations with other local bank CEOs, Silveria said that the estimated number of second round PPP loans is sitting at between 30 and 50 percent of the number of total first round loans.

It's difficult to parse the reasons for that, Silveria said. In some cases, businesses and nonprofits have successfully navigated the pandemic and don't need the assistance now. Some likely went out of business during the past year. Others did not qualify under the new eligibility rules when they perhaps deserved to.

One issue that Dantona pointed out about the revenue yardstick is that it doesn't consider costs. For some organizations, costs rose substantially during the pandemic—whether to pivot their business models or to pay for COVID-19 expenses, like personal protective equipment.

While he understood why the federal government added the eligibility requirements to target the PPP aid, Dantona said that the one-size-fits-all approach simply can't account for all situations and circumstances.

"Trying to make a rule that satisfies 50 states and 50 economies—how do you balance that piece?" Dantona said. "A lot was made of who they gave that first round of PPP to, versus the small guy, so you can see why they were trying to do that. But as with most governmental things, they're like, 'If it's not 25 percent, we can't do anything. That's our rule.' I get why it's like that, but it's also the hardest thing for small businesses, if it doesn't make any sense."

For Kearns, missing out on a second PPP loan likely means she'll be forced to take out a loan with interest to keep her business alive. The third-generation chocolatier said she's committed to doing so, and has never considered closing down.

"It was very difficult from the day we opened our doors but no, I don't give up that easily," Kearns said. "As far as being able to grow and be financially strong, it just puts us in a position where we are looking at borrowing, and it's just a shame." Δ