More than a decade ago, when I was working on my master’s degree at Cal Poly, I had some classes with a big mouth smartypants, a know-it-all who asked too many questions and had too many answers. She quickly became a close friend.

After she finished Poly, she traveled for awhile, eventually settling in Lake Tahoe, where she began work on her Ph.D and started teaching at a community college. Now Suzanne Roberts, with two new collections of poetry—Shameless and Nothing to You—returns to Cal Poly to read her work.

More information is available on her website, suzanneroberts.com. She engaged in an e-mail interview with New Times. 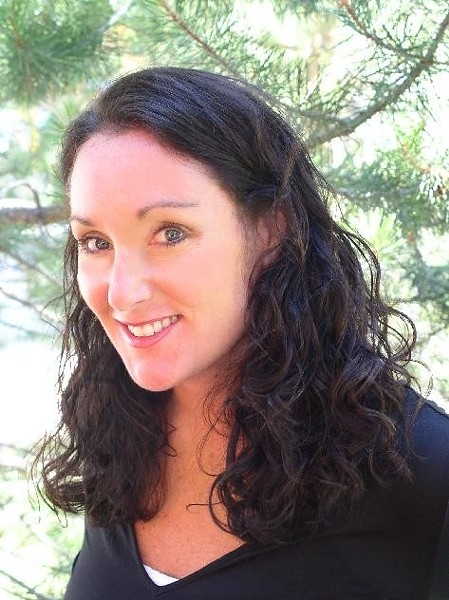 New Times Most poets struggle to see any of their poems published. How is it you recently had two tomes published back to back? Is there another en route for 2009?

Roberts First off, I have enough rejection slips to wallpaper my house… Getting poems and books published takes a lot of fortitude. I have students tell me they had a couple of rejections, so they are not going to send out any more. If I did that, I would have stopped a long time ago. I probably get one poem accepted for every 30 poems rejected, which I have heard is good odds. My advice to writers who are beginning to send out is to send out but not get too attached to the idea of publication (which is hard to do), but it is the writing that is important. Thankfully rejections didn’t stop Emily Dickinson, who had only seven of her 1800-plus poems published in her lifetime.

Having the two books come out back to back was coincidence. I have been writing poetry seriously since I took a poetry class with Kevin Clark at Cal Poly in 1996, so Shameless and Nothing to You are a culmination of 10 years of work. By the time I put a manuscript together, I had too many pages for just one book. Nothing to You was accepted after about three years and over 40 rejections, but my publisher wanted a much shorter book, so I rearranged things and put Shameless together with the poems I cut, along with some newer poems. I thought that since it took so long to get Nothing to You accepted, I should begin sending Shameless out. To my surprise, two publishers showed interest right away, and Shameless ended up coming out before Nothing to You. I have a manuscript together called Plotting Temporality and am working on another, comprised entirely of travel or place-based poems, called Almost Somewhere. I think I will probably begin the send-out process for Plotting Temporality this fall, so with luck, it will be out in 2010 or 2011. Almost Somewhere probably won’t be ready to send out for another year or two.

New Times You’re the outdoorsy type, and clearly nature plays a huge role in many of your poems. Tell me a little about nature as a source of inspiration.

Roberts I am not sure if nature is an inspiration or an obstacle. I struggle because writing and revising are mostly sedentary, indoor activities, and I love to be outside hiking or skiing. To make my working life even more difficult, I live in one of the most beautiful places in the world. A writer friend of mine from Los Angeles came up to give a poetry reading at my campus in Lake Tahoe, and she said, “I wonder if I would write if I lived here. I think I would just wander around outside.”

The good news is that I am old enough that I began writing in a journal and not composing on a computer, so when I do go out hiking, and even skiing, I write in my journal. I have a poem called “What Wings Know” that was composed, almost in its entirety, from the top of Red Lake Peak right before I skied down.

I do think my doctoral work in Literature and the Environment, as well as my undergrad in Biology, has informed some of my poems. Mary Oliver says that paying attention is our endless and proper work, and I think biologists or ecologists are particularly good at observation. A poet can learn a lot from thinking like a scientist.

I am currently exploring the relationship between women in nature in a memoir I am working on about women and hiking. A colleague and I are also co-editing an anthology of skiing poems, so if anyone has any poems about skiing, send them my way.

New Times In Shameless, many of the poems are about romantic relationships—mostly failed. It’s fairly
revealing! Do you ever wonder if you’re opening yourself up too much?

Roberts Of course Shameless is all about failed romantic relationships! In Charles Bukowski’s famous poem “Now if you were teaching a creative writing class” he offers all kinds of advice to his would-be students, and repeats the line “I would tell them to have an unhappy love affair” as the refrain, but most of us have already had many more failed relationships than successful ones. When love is happy, there isn’t too much to say about it. Not everyone can write “How Do I Love Thee? Let me Count the Ways” and pull it off.

The poet Galway Kinnell says something like this: In poetry, we tell everyone everything we would never tell anyone. I think that’s true. But at the same time, the beautiful thing about writing poetry is that it isn’t nonfiction. I tell my students that sometimes you have to lie to tell the truth. And sometimes you have to tell the truth to tell the truth. Which is which? Of course a reader will assume it’s all true, and a friend or ex-lover might recognize some of the facts of my life, but I am not too worried about whether the poems are “too revealing” or not. I am more worried about whether they are good poems or not.

New Times You’re a strong woman—feisty, opinionated. Do you consider yourself a feminist poet?

Roberts I would definitely call my poems feminist. The term feminist has gotten a bad rap, but I see the term as complimentary. If I didn’t think the poems inside were feminist, I don’t think I would have thought I could have gotten away with the ass on the front of Shameless. But then again, the cover is all about the dirty foot.

As little girls, and later, women, we are taught that to be shameless is naughty; we are also taught that if we do something that causes us shame, we are naughty. So both shame and shamelessness are negative things, so all that is left to women is feeling bad. We are also taught that it’s okay, even desirable, to be the sexual object, but we should not be the sexual subject. I see my female students walking around in the sexiest school clothes I have ever seen, their only power being to attract the male gaze, but in my mind, that’s not much power at all. In my poems, the narrator tries to reclaim herself as sexual subject, yet she is confronted by her own internalization of the culture’s standards. I am sure there are no answers in my poems to these problems, but I do hope the poems raise questions regarding gender and sexuality.

What do all these writers have in common? They all appear in Writes of Passage: In the Meantime, Memoir, a new anthology culled from 25 years of the best pieces originally published in the Hudson Review.
Wooton will join poet Suzanne Roberts to read his work on May 9.

Author! Author!
Cal Poly graduate and poet Suzanne Roberts and Cal Poly professor and short story writer Carl Wooton read from their work on Friday, May 9 at 7 p.m. in Building 8, Room 123—the lecture hall of the Bio-Resource Engineering and Management Building, located across the street from the English Building. The event is free and open to the public.
Glen Starkey occasionally writes poetry, but only using words that rhyme with orange. Send him your “orange” poems at gstarkey@newtimesslo.com.