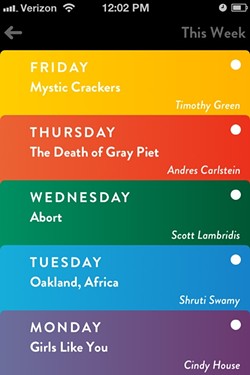 Susannah Luthi and Niree Perian were waiting for a bus when they thought up their short-fiction app, Connu. In retrospect, this location seems fortuitous—almost metaphorical, if you want to go there.

Launched in beta in November of last year, Connu (it’s French; say it like “canoe” and you’ll be close enough) is an application that delivers one short story by an up-and-coming author to a user’s mobile device every weekday. What’s more, each featured writer comes recommended by an established name in the literary world: To date, Connu has tapped Joyce Carol Oates, David Sedaris, Jonathan Lethem, Aimee Bender, and Sam Lipsyte (to name a few) to handpick the most deserving new fiction authors.

The result is a simple, clean, elegant, and so far, totally free mobile app that fills idle moments of the day with bite-sized helpings of never-before-published contemporary fiction. Intriguingly brief story notes hint at the day’s content: Ben Roberts’ “Interrobang” is summed up with “Hospitals aren’t generally messy … until trapped spirits invite late-night exorcists;” Derek Pilla’s “Coffee in the Morning” is loosely generalized as “Man’s search for meaning in meaninglessness.” Users have the option of reading a story or listening to its author’s narration. They can also read the day’s featured story or choose from an ever-growing archive of previous selections. The app also provides the option to file away favorite stories for easy retrieval and sharing.

Though she currently lives and works in San Francisco, Luthi is a native of the Central Coast. Born and raised in Templeton, where her family still lives, Luthi’s early education was a mix of homeschool, a private school operated by her mother, and Templeton High. She met Perian while studying at USC, where both were enrolled in the university’s Master of Professional Writing program.

This brings us back to the bus stop. The two began dreaming up the project that would become Connu, Luthi said in a phone interview, as part of a discussion on the problem of oversaturation in the literary world, and the tendency of today’s readers to become overwhelmed by the choices offered to them—while simultaneously feeling that they are somehow out of the loop of what’s really happening in contemporary fiction. Literary magazines have long been relied upon to offer a curated look at up-and-coming authors’ work, but such publications are growing scarce. Meanwhile, free publishing platforms offer more short stories than one could possibly sort through, but this is exactly the problem.

Connu is thus the answer to the questions Luthi encountered over and over again as a creative writing student: What’s new? What’s good? What should I read?

“One thing that we’re hearing is that people love”—here Luthi paused and laughed, unsure of how the next few words would sound—“kind of being told what to read! Not being flooded with choice, just having this nice delivery of a story that they can trust is going to be good.”

In October of 2013, two years after that initial bus-stop conversation, Connu was selected as a portfolio company by the Bay Area-based Matter Ventures, a start-up accelerator that supports media entrepreneurs. Luthi and Perian had tested out their author recommendation system in July of 2012, at the New York State Summer Writers Institute, and by August had their first submissions; writers recommended by authors like Janet Fitch and Wells Tower.

Luthi found most writers she and Perian contacted were enthusiastic about the idea, she said—once they got a hold of them. Perian even waited in line for three hours to meet David Sedaris at a book signing and ask him to participate. Sedaris not only agreed, but knew immediately whom he wanted to recommend: Cindy House, whose “Girls Like You,” was published on Connu within a few weeks of its launch in beta.

Connu went on to be accepted into USC Annenberg Innovation Lab’s digital design and incubation course. After a prototype won USC’s Innovation Challenge, Connu became the official startup-in-residence at the Annenberg Innovation Lab. A successful Kickstarter campaign in the summer of 2013, followed by the development of an alpha product and plenty of focus-group testing, led to company’s acceptance by Matter Ventures and its eventual beta launch late last fall.

Right now, Connu is just three people: Luthi (the startup company’s CEO), Perian (COO and editorial director), and technical lead Joseph White, hired last October. The startup has plans to make Connu more interactive, Luthi said, and while the free app doesn’t make any money—yet—Luthi and her team are currently brainstorming ways to make Connu financially profitable, and in turn give some of the proceeds to the writers, she said.

“We want to keep the app free, and we want to keep it so every week, everyone can tune in and read the same thing. And then past the first week if you want to go back and archive, we’re going to start charging for that. We really want to support writers financially.”

Our generation expects online content to be free, an attitude that Luthi lamented “makes the craft of writing seem not valuable. I mean, Niree as an editor will work weeks with a writer on an already-complete story. It’s craft, and a lot of stories will take months to write. We’re not just throwing something together and putting it out there. It’s an art.”

Of the stories on Connu, Luthi was reticent to choose her favorites, but ended up doing so anyway, citing Tegan Swanson’s “Interviews After the Salt Plague,” recommended by Benjamin Percy (“The last line of that is so powerful, and that story builds in such a beautiful way,” she said. “It’s kind of like a fable, but it’s very human. Very personal.”), “Oakland, Africa” by Shruti Swamy, recommended by Maxine Chernoff (“I’d say it’s like if Carson McCullers lived in San Francisco today and was writing about cross-cultural relationships,” she said. “That author really likes to explore the opposite emotional lives of two people and putting them together, and the strong contrasts of impressions that those two people have. It’s this white girl who’s dating a Somali refugee. And it’s very short, but it kind of feels epic. It makes my heart hurt. I love it.”), and “Take Me Home,” by Amy Silverberg, recommended by Mark Richard (“It’s a satire of a shallow L.A. woman who kind of gets played by an unattractive comedian. I was living in L.A. for a while; it’s such an L.A. story. It’s satirical, it’s a little harsh, it’s so well told. And there’s a great twist at the end.”).

Readers have had strong responses—good and bad—to “Filled Blank,” by Rick Moody’s recommendation, Adam Dalva. “Filled Blank” tells the story of 20-something in New York entirely through his Google search history.

“You can clear your search history, but you can’t erase real life …” the app’s story notes taunt.

Luthi sees the experimental piece as a perfect example of how literature changes form to suit a given media.

“Plays used to be how people experienced literature, or poetry readings, and the printing press changed that,” she pointed out. “Novels used to be in epistolary form … Dickens was all in the newspapers, so his novels were serialized, almost written like TV episodes. So that story kind of is an experiment in form.”

“Filled Blank” is also a fitting selection for a mobile publishing company that is already shaping the way people experience fiction. After all, it isn’t just the literary community that is becoming interested in Connu: According to Luthi, many users weren’t fiction readers at all before downloading the app.

Indeed, upon trying it out myself, I was struck by how few excuses it leaves for not reading fiction whenever a five- to 10-minute window of time presents itself. If you have an iPhone, it’s all there—weightless, pre-selected, costing nothing. On the bus, I was jolted by a sudden turn of events in Joshua W. Jackson’s “The Misfit of Conception Heights,” annoyed to realize that my stop was fast approaching. I fought sleep to read Susan McCarty’s “Fat of the Land” and Madeline Stevens’ “Walls,” telling myself, it’s OK—they’re short. And in a waiting room I found myself reading “Coffee in the Morning” twice, thinking, what does it all really mean?