Like off-road vehicle enthusiasts, mountain bikers have their detractors. Some claim they damage the environment, causing erosion and destruction of sensitive habitats. But one mountain biker group, now celebrating its 20th anniversary, has consistently worked to demonstrate its commitment to environmental concerns associated with the sport. 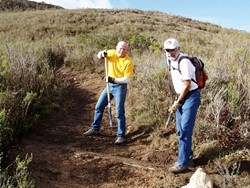 # On Sunday, Feb. 4, Central Coast Concerned Mountain Bikers (CCCMB) will hold its 20th Super Bowl Sunday Workday. Think of it as a way to get a little exercise before spending the afternoon riding the couch and doing 12-ounce curls.

The group was born out of controversy, but not of its own making.

"We have at our roots a group of cyclists who came together out of concern about a proposed closing to mountain bikes of Monta"a de Oro State Park," Bettencourt explained. "In 1987, amid rumors about the impending closure, we met with State Park staff and volunteered to work to repair erosion problems thought to be associated with mountain bike use on the trails. Since that initial contact, we've expanded our volunteer efforts to include many levels of trail maintenance and construction, totaling several thousand hours of volunteer work to date. As a direct result of our work, trails are still open to cyclists at Monta"a de Oro State Park."

Still, detractors may wonder if such work is conservation or setting the stage for further exploitation by bikers. CCCMB is adamant that they're mitigating environmental damage via trail maintenance not worsening it by encouraging more bikers to travel through sensitive areas.

"[It's] conservation! We do trail maintenance at the direction of the land managers and within their established parameters and standards," Bettencourt asserted. "The trails we construct are constructed at the request of the land managers who are very careful to meet all federal and state requirements for protecting the environment.

CCCMB is hoping that more than mountain bikers will join them on Sunday to work the trails of Monta"a de Oro State Park.

"We have a long history of working cooperatively with various equestrian groups as well as the Sierra Club hikers and many other trail users," Bettencourt said. "Because of our 20-year history of working cooperatively with other user groups, SLO County is free from the strife that [has] plagued many other parts of the state and nation. Representatives from different user groups all sit on the same government committees and participate in making decisions and moving things forward to everyone's best interest. This Feb. 4th, I would guess that we'll have two-thirds bikers and one third other trail users. We get 75-year-olds doing it for exercise and 15-year-olds doing it for community service. CCCMB provides crew leaders to make sure work gets done to standards and to instruct volunteers (because many have little or no experience) on how to do maintenance correctly."

Work will begin at 9 a.m., but those interested in being fed bagels, House of Bread goodies, juice, and hot coffee should arrive to the park by 8:30 a.m. There'll be a raffle at 8:45, safety talk and intro at 9, followed by trail maintenance in crews covering every cycling trail in the park: East Boundary, Barranca, Ridge, Manzanita, and Yedra. State Parks and CCCMB provide tools and leadership. Volunteers are suggested to wear long pants and sleeves and solid work shoes, and to bring plenty of water. For more info, visit www.cccmb.org.

Glen Starkey would mountain bike more if there were trams to the top. Whip him into shape at gstarkey@newtimesslo.com.