Consuming the unknown: Fentanyl poisoning is getting legislative attention Editor's note: This is the third installment in a series documenting the prevalence of fentanyl in SLO County. The second, "Purchased largely online, fentanyl deaths are increasing," was published March 4.

March 23 was a difficult day for many parents who were seeking justice for their loved ones at the California Capitol, including Central Coast mothers Cindy Cruz-Sarantos and Cammie Velci.

Both women honored their sons who died a year ago after unknowingly consuming fentanyl by attending a Public Safety Committee hearing alongside other parents to support Senate Bill 350, also known as Alexandra's Law. Emilio Velci, 19, died on March 8, 2020, and Dylan Kai Sarantos, 18, died May 8, 2020.

The legislation would advise an individual in court—who's already been arrested on a drug charge—that selling, distributing, possessing, or manufacturing a controlled substance could cause death from an overdose, and it could lead to a homicide charge. Alexandra's Law, authored by state Sen. Melissa Melendez (R-Lake Elsinore), would be used to prosecute future cases when someone dies because of the illegal manufacturing, transportation, and distribution of drugs.

During the March 23 meeting, there were more than two hours of public comment from parents, family members, and friends who had lost loved ones from opioid-related deaths speaking in support of the proposed bill. However, the emotional testimonies and pleas for support weren't enough to sway the four-person committee. The proposed bill failed, with only state Sen. Ochoa-Bogh (R-San Bernardino) voting in support of it.

Velci lost her son, Emilio, after he took what he believed was Percocet, but it contained fentanyl. She told New Times that she walked out of the meeting and cried.

"To be in that environment, in the state Capitol, and thinking we have a great argument and our presentation is flawless. I mean what parent or human being wouldn't want to pass this?" she said.

Listening to the opposition's arguments was extremely frustrating, Velci said. As soon as she started walking out, Cruz-Sarantos found her and hugged her.

"The atmosphere was heavy, disappointing, and angry. A lot of parents were angry. We've lost our children. They were our world, and we're trying to help other families and parents from going through this pain," said Cruz-Sarantos, who lost her son, Dylan, after he took an ecstasy pill that he didn't realize was cut with fentanyl.

Three other attendees immediately walked out of the hearing, Cruz-Sarantos said, because they were frustrated with comments from committee member state Sen. Steven Bradford (D-Gardena). During the hearing, Bradford said that there wasn't a person on the committee who didn't sympathize with the families and understand the pain of losing someone to a drug overdose. 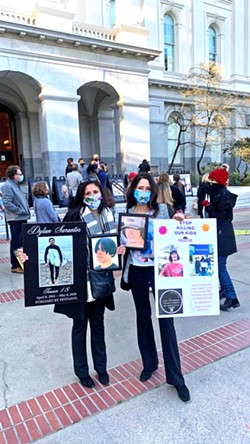 "But what is missing here is, as I think some of the senators have tried to articulate, there is a level of culpability from the user," he said during the hearing.

Bradford argued that when an individual purchases an illegal drug not prescribed by a health care professional, there's an inherent risk involved and a level of responsibility for buying something illegal.

Other committee members said the legislation wouldn't rid the streets of drug dealers—if you get rid of one drug dealer, another takes his place. They also argued that more people of color are arrested for drug offenses, and that this legislation would increase the number of minorities who get arrested and imprisoned.

Melendez said she understands why constituents feel that it's pointless to contact their legislators because "they don't listen, and that's kind of how it feels."

She pointed out that during the hearing, one of the committee members said that if Melendez took the "implied malice"—notifying an individual that illegal drug activity could result in another's death—portion of the legislation out, the bill would still be effective. Melendez said that's not the case.

Senate Bill 350 came about after Melendez's constituent Matt Capelouto reached out to her about his daughter's death. Alexandra Capelouto, 20, unknowingly consumed five times the fatal amount of fentanyl in 2019—at the time she believed she had purchased oxycodone.

As a parent of five children, Melendez said, she kept hearing more and more stories of loss similar to Capelouto's, and it worried her.

"It was terrifying. You know you raise them right and tell them about the dangers of drugs. You do everything you can, but there's nothing you can do once they walk out your door," she said.

It was frustrating, she said, to hear the phrase "accidental overdose," because she and the parents believe the correct phrase to describe what happened to their children is "fentanyl poisoning." Melendez's legislation includes "implied malice" because, she argues, people in the drug business know their products could contain ingredients that can kill their clients.

She's going to meet with her local district attorney and the Public Safety Committee's consultant in hopes of coming to a consensus that will move the bill forward. Melendez said the legislation isn't a magic bullet that's going to solve the problem and the opioid epidemic. But the bill could be coupled with increased funding for rehabilitation, law enforcement collaboration, and robust education.

"I think it can all work together and it's not going to solve it entirely, but we can't throw our hands in the air and say, 'Well, there's nothing we can do,' because I just don't believe that's appropriate," she said.

Lo Petty, site manager of the syringe exchange program SLO Bangers, told New Times that she thinks the community and society as a whole need to have real conversations about drug use and stop stigmatizing individuals who use drugs.

"We immediately want to push them into some sort of recovery program, and that can just drive people further underground. Doing so results in folks using alone, and the risk of a fatal overdose is higher if folks use alone," Petty said.

The SLO Bangers team works to reduce the spread of blood-borne infections associated with shared needles and equipment by providing the exchange program as well as providing safe syringe use information, addiction recovery information, HIV/HCV testing, and naloxone (also known as Narcan)—a shot that reverses an opioid overdose.

The team provides these resources to their program participants in a safe and nonjudgmental space, which Petty said she believes is how society should approach talking about drugs.

The community should also realize, Petty said, that opioids like fentanyl have been in SLO County for years. SLO Bangers provides its program participants with fentanyl test strips to test their drugs for fentanyl. Petty said the substance is regularly detected.

Participants who receive Narcan also undergo training to properly reverse an opioid overdose. Petty said SLO Bangers participants are saving about 20 lives a month. But, she said, long-lasting success won't come without destigmatizing drug use and normalizing conversations about it.

Fighting the stigma, raising awareness, and changing—what Velci and Cruz-Sarantos believe is—the mischaracterization of their sons' deaths has embedded them in a growing community of parents who lost a loved one.

"I think the fighting does help, and I think it is healing to do something in honor of our children, so their deaths were not in vain," Cruz-Sarantos said.

"Our children weren't addicted to drugs. They had such great personalities," Velci said. "They didn't want to die, they were poisoned. We can't say this enough: It was not an overdose." Δ