Between a landmark Supreme Court ruling for the LGBTQ-plus community and a Trump administration rule that goes in the opposite direction, this year's Pride Month has been one of both victory and distress for members of the queer community.

But no matter what the federal government decrees, Planned Parenthood Central Coast wants residents to know that they will continue to get the services they need.

"Regardless of your sexual orientation or gender identity, where you're from, the language you speak, or whether you've had an abortion, every person deserves access to health care, free from judgement and discrimination," Planned Parenthood Central Coast CEO and President Jenna Tosh said. "I think especially during a public health crisis, any rule that makes it harder for marginalized people to access health care is unconscionable." 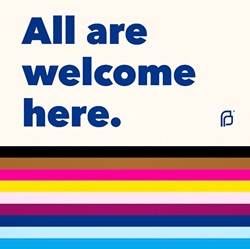 U.S. Rep. Salud Carbajal (D-Santa Barbara) echoed this sentiment, saying that the Trump administration "is looking at every way to continue to undermine [protections], in this case health benefits, to members of the LGBTQ community."

Tosh explained that the Trump administration's June 12 ruling, which rolls back nondiscrimination protections for sex and gender identity put in place by the Affordable Care Act, will allow "health care providers, hospitals, and insurance companies that receive federal funding to refuse to provide or cover services such as LGBTQ health care."

But, she said, this will not have any immediate impact on Planned Parenthood patients' ability to get access to care.

"At Planned Parenthood we provide care to everyone," Tosh emphasized. "The main concern here is that, in reading about these types of rules, this could have a chilling effect: It could make trans folks more reluctant to seek care with trusted health care providers."

In addition to welcoming folks regardless of their sexual orientation or gender identity, Planned Parenthood Central Coast started providing gender affirming care about a year ago, Tosh said.

"We spoke to patients and activists in the community who told us that the closest place for many trans folks to get access to gender affirming hormone care in Santa Maria was to travel to San Luis Obispo," she said. "So over the past year we've served over 300 patients at our five health centers. And right now, during COVID-19, we're seeing even more through telehealth."

Mickelberry said that the Planned Parenthood team "will work with patients to determine how to pay for gender affirming care services, whether they have insurance or not. We provide care to everyone, regardless of their ability to pay."