When the City of Arroyo Grande installed surveillance cameras in strategic locations throughout its historic Village District in January, the decision stirred controversy from city officials, residents, and people determined to preserve the rustic feel of the area. 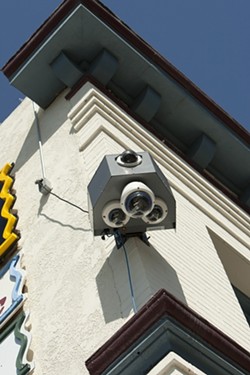 Bickering went on for months, but few people knew that the cameras weren’t actually recording.

According to Police Chief Steve Annibali, the vendor selected to do the installation work is set to install the final camera pod, possibly within hours of this printing. Only then, he said, will the closed-circuit system be finally operational.

“We have actually already seen something of a drop in incidents in the coverage areas,” Annibali said, noting his observations are anecdotal and not yet backed by crime statistics. “It’s interesting, because even though they haven’t been up, the [media] coverage that they got seemed to get the word out.”

Annibali said roughly five people, victims of fender-benders and small vehicle burglaries, have come to the department since January, asking if they could see the tapes. They were politely informed the cameras weren’t recording, he said.

The camera vendor contracted to build the system, Los Angeles-based Security Lines U.S., is set to install the last of the cameras on May 10 or 11, when the system will be officially up and running.

The system—dubbed “Operation Blue Watch”—has been some time coming, with the city allocating nearly $50,000 in police department budget funds for the project since the 2009-10 fiscal year. An additional $15,000 was secured for the project from a federal Department of Justice grant in May 2009.

The decision to erect the system on historic buildings drew some flack from the City Council, the public, and the city’s Historical Resources Committee.

“But I understand where they’re coming from, and we worked to make them as [inconspicuous] as possible while still allowing them to serve their purpose,” Annibali said.

In the end, a total of 10 cameras pods will be installed in the area in response to numerous instances of vandalism and other property-related crimes. Each pod includes three to four cameras.

Though each pod captures live feed video that can be viewed remotely at the department’s dispatch office, the cameras store material internally, and recordings can only be extracted manually from the pods themselves. Annibali said only he and a top commander have the keys to download the material. This is in response to privacy concerns about how the images will be gathered and used, he said.

“It’s a very formal process. We have to make a request [for the recordings], and once we download the material, those images are part of the public record,” Annibali said.