Prominent rancher Ernie Dalidio may have found a buyer for his 131-acre property on the outskirts of the city of San Luis Obispo—but the deal’s not sealed yet.

Dalidio couldn’t be reached for comment on the transaction, but Dennis Allan, of Arroyo Grande-based Allan Real Estate Investments, the broker listed for the property, confirmed to New Times that the property is currently in escrow. 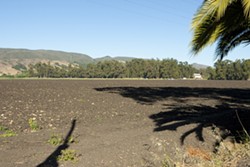 He said his office isn’t yet releasing any additional details on the potential sale, out of respect for both parties, given the size of the property and the history of the land.

“This is obviously a very large transaction,” Allen said May 29.

Despite the fact that the Dalidio Ranch sits just west of Highway 101 among a growing sea of developed commercial and residential land, Dalidio has fought to develop retail venues on it for the last two decades.

Following the city’s decision to annex the land in 2005, it became ground zero in a fight against the city by downtown businesses opposed to competition and by environmental groups. A petition brought by critics of the project led to the city placing its decision on a ballot measure that was defeated by a narrow margin.

Dalidio then responded by introducing the countywide Measure J in 2006, which won handily with 65 percent of the vote. That victory entitled the property use to include 530,000 square feet of commercial space, including a possible hotel; 198,000 square feet of business and office space; 60 residential units; an organic farmers market; a sports field; and land reserved for open space and freeway access.

A SLO County Superior Court judge later invalidated the measure, but Dalidio later won his case on appeal. In October 2010, major downtown SLO developers Thomas and Jim Copeland were outed as Dalidio’s foes after the Fair Political Practices Commission fined the brothers $80,000 for concealing more than $220,000 of their funding for opposition to Measure J.

Since the battle over Measure J, the area surrounding the land has seen development, including the erection of new Target and Old Navy stores—once considered for inclusion in Dalidio’s San Luis Obispo Marketplace project that never came to fruition.