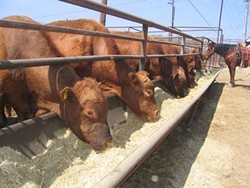 Nationally known sustainable food expert Michael Pollan will now be part of a panel discussion at Cal Poly on Oct. 15 rather than giving his planned one-hour lecture. The recently announced format change comes on the heels of a letter to Cal Poly President Warren Baker from Harris Ranch Beef Company Chairman David E. Wood, threatening to withdraw a pledged $500,000 donation for a new meat processing facility on the campus.

“I find it unacceptable that the university would provide Michael Pollan an unchallenged forum to promote his stand against conventional agricultural practices,” Wood wrote in a Sept. 23 letter to Baker. The invitation “caused me to rethink my continued financial support of the university,” he wrote.

Pollan is the award-winning author of An Omnivore’s Dilemma and In Defense of Food, and appears in a recent documentary, Food, Inc. He is a Knight Professor of Journalism at University of California, Berkeley, Graduate School of Journalism.

The Sustainable Agriculture Resource Consortium, which invited Pollan to speak at a free lecture at 11 a.m. on Oct. 15 at the Performing Arts Center on campus, will now present “A Conversation with Michael Pollan,” which will also include Gary Smith, Monfort Endowed Chair in meat science at Colorado State University, and Myra Goodman, cofounder of organic vegetable company Earthbound Farms.

Baker replied to Wood in a Sept. 28 letter, “We are diligently working to create a more balanced forum for October 15. … Our singular goal is to provide our students with a full perspective on how the agriculture industry is working to be efficient in its production techniques, and to make sure that our students are familiar with the full range of ideas that are being advanced today.”

Baker’s letter also stated his appreciation for Harris Ranch’s financial support, noting, “It’s your prerogative to direct it elsewhere if you are so inclined. It is possible such a decision may result in the delay of Cal Poly’s construction of a meat processing center … In the end, I fervently hope that you choose to support Cal Poly.”

According to the dean of the College of Agriculture, Food, and Environmental Sciences, David Wehner, the decision to change Pollan’s lecture format to include a representative from the beef production industry did not necessarily result from the Harris Ranch letter.

“We had planned to have some kind of panel, whether it was on the same day, the next day, or a week later,” he told New Times.

Wehner said he is “not worried” about Harris Ranch withdrawing funding from Cal Poly, adding, “It’s their prerogative. If they pull it, they pull it.” The new $5 million meat processing facility is about to go out for construction bids, he said.

It was Pollan’s decision to join a panel discussion, rather than speaking beforehand, the dean said.

“A fair number of students will already have read Michael Pollan’s writings. Having a discussion with him is actually going to be more valuable,” Wehner said. “It’s a sustainability event, and we wanted to hear about how the industry is doing more with less—less water, less fertilizer, less pesticide.”

Each speaker will make opening comments before accepting written questions from the audience.

Harris Ranch spokesman Michael Smith, assistant to Wood, said in a phone interview from the beef company’s headquarters in Selma that a decision about funding for Cal Poly’s meat facility “has yet to be made.” Smith, a Cal Poly agriculture alumnus, said many alumni will be coming to the forum “as a show of force about the direction the College of Agriculture is taking.”

Smith said, “People across the nation are upset. They are saying enough is enough. This is bigger than Michael Pollan.”

The Sustainable Agriculture Resource Consortium’s director, Hunter Francis, said with the new format, “the audience will hear something they won’t hear anywhere else.” The newly added industry representatives, he said, will attract a wider audience to the event.

“Our goal is to involve as many people as possible in discussions on how to improve the sustainability of our agriculture production and food system. People really seem ready to have this discussion. Michael Pollan has raised many people’s awareness,” Francis said.

The letter from Harris Ranch Beef Company did not surprise him, since Pollan is critical of production agriculture. “Harris Ranch is facing their own challenges with regulations, water resources, and the economy,” he added.

In a follow-up letter to President Baker dated Sept. 30, Wood and Smith of Harris Ranch wrote, “We applaud Cal Poly for negotiating a ‘compromise format’ for the exchange of ideas and representation of opposing views. … The views of elitists like Michael Pollan can no longer go unchallenged.”

Their letter also stated, “We find it incredulous that the Sustainable Agriculture Resource Consortium … has been allowed to operate as an autonomous entity” that made an independent decision to invite Pollan to speak. The Harris Ranch representatives pointed out, “Effective September 25th, SARC now officially answers to CAFES [College of Agriculture, Food and Environmental Sciences].”

The sustainability group has been working for some time to become an official Sustainability Center under the agriculture college, according to Francis. That process is nearing completion.

Wood’s letter to Baker also criticized the viewpoint of Animal Science Department professor Rob Rutherford, a sheep specialist who is chairman of the California Sheep Commission and president of the California Wool Growers Association. Smith of Harris Ranch had a phone conversation with Rutherford about sustainability, and Rutherford’s opinions “provided me with both displeasure and outright anger towards the university,” Wood wrote.

“I have shared Mr. Rutherford’s opinions with a number of Cal Poly graduates, donors, and others in the ag industry. They are uniformly shocked … They have likewise questioned whether they should continue to support the university,” his letter stated.

Wood suggested that Rutherford should be removed from teaching a required class called “Issues in Animal Agriculture.”

Rutherford later told New Times the faculty recently voted, in an unrelated action, to eliminate the requirement for that class but to keep offering it.

Regarding the evolving word “sustainability,” Rutherford said, “We’re trying to sustain civilization. It’s a matter of using the tools at our disposal in an effective fashion, to feed people and all organisms far, far into the future.”

He added, “The purpose of a university—the root word is universe—is to explore as many different ideas as we can. Students ought to be capable of critical thinking and analysis.”

Rutherford welcomes the idea of a Sustainability Center at Cal Poly, not just for organic farming but also for architecture and engineering.

“I’m certain it will cause conversations. I think that’s what we’re about.”

Award-winning environmental journalist Kathy Johnston can be reached at kjohnston@newtimesslo.com.