Cook like a local with 'SLO Farmers' Market Cookbook'

Bright yellow squash blossoms, plump strawberries, and blood oranges so juicy they’ll stain your chin red. What do all of these sexy summer treats have in common? They are nothing less than edible rock stars to Kendra Aronson. She literally squeals with delight when strolling the Thursday Night Farmers’ Market—or any number of the 19 other markets across SLO County. 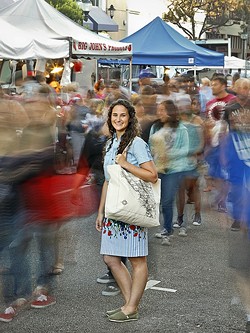 “I always get so stoked when it’s strawberry season; or when it’s autumn and all of the root vegetables come back to the market,” Aronson said.

On any given day, you’ll find the curly-haired writer, photographer, and self-publisher stooped over the cukes or heirloom tomatoes, smiling wide and gabbing with farmers about the fruits of their labors. Just look for the DIY “farmers’ market” tote bag slung over her shoulder, showing a geographical map of each market. Yes, she’s actually a farmers’ market super fan.

It’s this wild fandom that inspired Aronson to create the SLO Farmers’ Market Cookbook, a colorful collection of simple seasonal recipes and short stories. This week, she launched a Kickstarter campaign for the project, which is completely finished save for the pesky “publishing” part. Aronson hopes that local people will throw down a few bucks to support a local book that—in turn—supports local ranchers, growers, chefs, and restaurants. Can you get more local than that?

Aronson said she was shocked to find that Austin, LA, Seattle, and San Francisco all had farmers’ market cookbooks, but SLO did not.

“It’s so crazy—we have one of the biggest, largest, most famous farmers’ markets anywhere,” Aronson said. “I couldn’t believe the book didn’t exist yet. I knew if I didn’t write it, I would regret it for the rest of my life.”

The author’s road to the book was more of a detour. After attending Cal Poly from 2005 to 2009, where she studied languages and literature, including Spanish, French, and Italian, she took a few life-changing trips to Italy and Spain. The food blew her mind. After graduation, she took a nanny job in France for six months, where she met her future husband and immersed herself in the farm-to-table lifestyle (it’s just called ‘life’ in France).

“I’ve always loved traveling, culture, meeting new people, and trying new food,” the author said. “Growing up, it wasn’t popular to eat farm-to-table. Going to the grocery store, you didn’t always realize that there really were seasons to food.”

Aronson went on to get her master’s degree from San Francisco State, and, armed with her TESL certificate (teaching Engish as a second langue), she promptly had a change of heart. She was burnt out on teaching (and budget cuts associated with the field), and she had somehow fallen in love with food writing instead. What to do? At least she was living in the Bay Area, where heart-palpating food experiences abound.

Inspired by a foodie-centric list curated by San Francisco’s 7x7 Magazine, Aronson vowed to eat through 100 food and 50 drink recommendations, blogging along the way.

“That’s where I really found my voice in food writing,” Aronson said. “I wanted to see if I could meet daily deadlines; it was one day, one post for 100 days.”

If you think penning a post on both a specific food and drink every day sounds like fun, think again. Aronson, who was working as a cheese monger at Mission Cheese at the time, dined and drank on her own dime, dashing from restaurant to taco truck to bar whenever she had a spare moment.

“I would hit up the appetizer at one place, then go across the street and have the entrée there, then go somewhere else for dessert,” she said. “I would always go during off hours so I could talk to the owner or barkeeper. It was sort of a pre-book project to see if I could do it.”

She even caught the eye of 7X7 Magazine, which featured the young foodie, giving her a dose of much-needed confidence. When she relocated to SLO with her hubby, she knew what she wanted to do. Armed with her prior love of Central Coast farmers’ markets and knowledge of really good, global food, Aronson set out to write a book. The tome took shape as she explored the region’s patchwork of farms, orchards, ranches, and greenhouses.

“I knew I was going to do everything—the writing as well as the photos and designing,” Aronson said. “At the time, I didn’t have any background in that. I had dabbled in photography, but was not a photographer for hire.”

That’s hard to believe, considering how pretty the book’s pages are. The local bounty is captured in a stark, clean environment in an effort to make the edible creations the real stars of the show.

Recipes meld local produce with no-nonsense instructions and snippets of the area that conjure up rows of lettuce and fields of broccoli.

“My goal with this cookbook is to foster a genuine friendship with the farmers, food artisans, and farm-to-table chefs that make SLO County so vibrant,” Aronson said. “I want to inspire others to shake the hand that feeds them.”