The SLO Police Officers' Association goes after a city councilman

The war over binding arbitration in San Luis Obispo is heating up and getting weird. While the usual bric-a-brac of electioneering—signs and political advertising—are slowly popping up around the city, a back story of the struggle between the police association and leaders of the binding arbitration repeal movement is bubbling up to the surface. 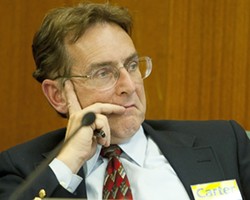 The stakes are high for both sides. The SLO Police Officers’ Association and the SLO City Firefighters Local 3523 are gearing up for an Aug. 30 mail-in vote over binding arbitration, a negotiating practice that brings in professional arbitrators to make final decisions on police and firefighters’ benefits and pay. While the police and fire unions say binding arbitration is a necessary and fair labor practice, city leaders say the city can’t afford the salaries it may have to pay because of future arbitration decisions.

Recently, a potential procedural mishap by Carter has revealed the Police Association’s willingness to try to push for any advantage it can in the political melee over city finances. The head of the SLO Police Officers’ Association, Matt Blackstone, filed a complaint with the California Fair Political Practices Commission, asking for an investigation into Carter for alleged illegal acts.

The whole episode began when Carter sent an e-mail to his council colleagues and City Manager Katie Lichtig, stating he was going to try to get a Fiscal Sustainability Task Force report presented to the City Council. He then gave his arguments as to why the report should be put on a future agenda.

Such a mundane request about a now nearly forgotten task force normally wouldn’t attract much notice, but Carter argued why the report should be presented to the council in his e-mail.

Blackstone alleged that this was a violation of the Brown Act.

The Brown Act, a California law that restricts what elected officials can do out of the public eye, states that legislative “actions be taken openly and that their deliberations be conducted openly.” City Council members aren’t supposed to discuss city issues outside of public meetings.

Carter didn’t get the report presented to the council—he was voted down by his colleagues at their Jan. 4 meeting. But it did draw the interest of Blackstone and the Police Association, which obtained a large batch of e-mails between Carter and city staff members and others. These e-mails and documents have been obtained by New Times.

Carter’s request caused a stir, especially in the legal realm. Many of the e-mails the union obtained were redacted by the city’s lawyer, Christine Dietrick, claiming attorney-client privilege. In an e-mail to the entire council, Lichtig said she had asked Carter not to communicate with them concerning the report except during the council meeting. She told him that sending an e-mail to the council about the report was not appropriate.

Dietrick told New Times she determined Carter’s e-mails weren’t a violation of the Brown Act, because they concerned whether to put something on an agenda—not a deliberation over an agenda item.

In the end, the Fair Political Practices Commission rejected Blackstone’s claims because the commission said it doesn’t have jurisdiction over suspected Brown Act violations. That falls to the SLO County district attorney. As of press time, Blackstone hadn’t forwarded his complaint to the D.A.

The documents Blackstone turned in to the commission, however, open a door to some of the backdoor activity in SLO politics.

Caught in the sweep of Blackstone’s public document requests were some e-mail exchanges between Carter and Chip Visci, an ex-publisher of the San Luis Obispo Tribune and a member of the task force. Carter clues Visci in to his efforts to get the Task Force report presented to the council, and Visci replies, explaining his efforts to get his old paper to increase coverage of the city financial issues.

“I met with Sandy [Duerr, vice president and executive editor of the Tribune] this morning,” Visci said in one e-mail. “I showed her several editorial possibilities as well as some news story possibilities. I told her there would be sonme[sic] interesting conversation at tonight’s meeting. Don’t know if the Trib will be covering. She indicated that over the next few weeks, they would attempt a couple of new articles tied to the nationwide growing concern over public-sector pensions … and an editorial would likely be in the offing. Let’s see what happens. And good luck. I appreciate your pushing on this.”

Carter emailed back after the meeting, telling Visci the council had turned down his motion and the Tribune reporter had already gone home by the time of the vote.

Visci replied to Carter later in the day.

“Bummer,” Visci wrote. “Maybe you can pull together a few people to quietly brainstorm a smart counter campaign that gets some traction outside the council chambers?”

Carter eventually did mount a campaign, and he seems to have done a good job. He convinced three of his fellow council members, all of whom had been supported in the 2010 election by the police and fire union, to vote to put binding arbitration on the ballot.

Visci said he saw a good story in the fiscal tribulations of the city and was merely passing on some story ideas.

“I’m a private citizen,” he said. “I thought there was some potential news stories here, so I thought I would offer my thoughts. No more, no less.”

Blackstone released this statement about the situation.

“As an observer of the local political process, I have had ever-increasing concerns about the lack of transparency in local government and the behind-the-scenes dealings with some of our politicians and special interests,” Blackstone wrote. “While the violation itself is a relatively minor issue involving Councilman Carter trying to push forward his agenda against public employees, behind the scenes, in concert with the Tribune as his backup. It serves to highlight the lengths to which politicians will go, to scapegoat public employees for many of the problems that they themselves caused or contributed to, at the local, state, and federal levels. These same politicians depend on the apathy of the electorate to continue to operate in this manner. Increased awareness is one of the main tools for dealing with these issues.”

Carter seems a little puzzled by the whole situation, but chalked it up to political hijinks. He denies he was in any way trying to subvert the Brown Act or conceal anything from the public.

“If I thought it was a Brown Act violation, I would never have put in a red file [correspondence directed to be publicly presented to the council] for the public to see,” he explained. “My whole point was to get the task force report presented to the public.” ∆