It was only his first job, straight out of Cal Poly. He figured he’d stay a year, tops. Instead, several decades later, Alex Zuniga still gets up and does the same things he’s done for the past 30 years: produce and design New Times, San Luis Obispo County’s weekly newspaper—although, now he’s also one of the paper’s owners.

It was Aug. 12, 1986, the day before New Times was born. Newspaper founders and friends Steve Moss (the writer/editor) and Bev Johnson (sales/advertising) were getting a little too close to deadline and they had no one to help finish putting the paper together. Enter Zuniga, who met Moss through a friend at school.

“They were scrambling around and had lost their production person,” Zuniga said. “I came in and it wasn’t rocket science for me because I had already been doing that at Cal Poly.”

After that first issue, he stayed on, helping to design the paper and even delivering a few, working for experience initially. The three worked on a single early Mac computer, taking turns to get everything done.

“It was a shoe-string operation in the beginning; we didn’t have the money,” Zuniga said. “I was a student. We had one computer and would share it.”

While Zuniga designed the paper on the computer back in the day using the Mac program Page Maker, the digital influence ended there. The different elements of the paper—the words, the photos—were printed out, cut up, and arranged on boards. On deadline day the newsroom floor was littered with tiny scraps of paper. The boards were then sent to the printing press where a special camera took a giant negative of each page and put that on a giant photosensitive plate and then printed the paper. With this method the design options were limited, to say the least. For a time, the paper was flown from SLO to Southern California where it was printed, adding another level of stress to getting things done on time.

“You couldn’t be late, you’d miss the plane,” Zuniga said.

When the paper was turning a profit, Moss sat down with Zuniga to talk money and shares in the company. Moss wanted to know how long the kid might stick around. 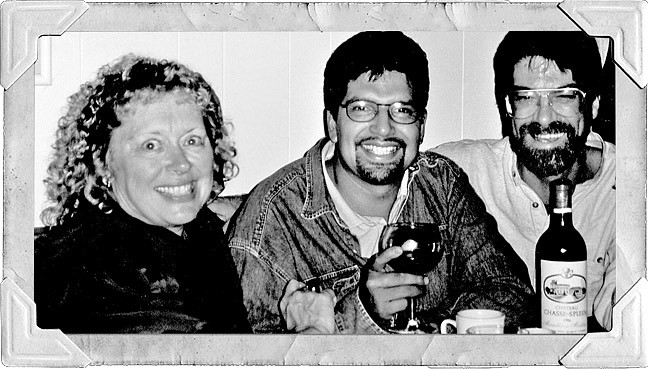 “It was kind of crazy so I said, ‘I imagine I can maybe stay a year,’” Zuniga said. “I wish I would have said longer because I would have gotten a larger percentage, but it worked out.”

New Times is the only grown-up job Zuniga has ever known. He’s seen it housed in different offices; he’s seen different editors, designers, and writers come and go. He’s also seen the production of New Times go completely digital. But the newsroom wasn’t devoid of scraps of paper in production until the early 2000s (around the time New Times got a sister paper, the Sun in Santa Maria), which sounds absurdly late, but the printing presses weren’t really equipped to work with digital files until then. From a design standpoint, it was a whole new world. That first cover in 1986 was completely in black and white, save for the red New Times logo. The cover story was on the burgeoning restaurant scene in SLO and featured a boxy image of hands holding a knife and fork, with black outlining the photo. A recent 2016 cover on prostitution (written by veteran writer Glen Starkey) featured a purposefully blurred color image of a leggy woman accepting cash.

“I was really excited about the new computers and their capabilities,” Zuniga said. “We tend to be more visual and image oriented now.”

He started out as the young college grad on staff, but today Zuniga is the veteran at New Times, the sole founder at the paper. The paper has changed and evolved since its inception, even during the Moss days, but he thinks the future is bright.

“We’ve been weaker, but I don’t know if we’ve been much stronger than we are now,” Zuniga said. “We’re in a good place. We have a strong staff and it shows in the work that we do.”