Corb Lund knows how to tell a story. On “Bible on the Dash,” the Canadian honky tonker explains how the best protection from the police is, well, what the title says: “A two night stand in Tulsa/ pullin’ out and headed west/ Freddie grabbed the Gideons from the hotel in the desk/ And we said what’s the matter, brother?/ Are you worried about your soul?/ He said better safe than sorry, boys, that’s just how I roll/ We hit the road a feelin’ cool as Crosby, Stills, and Nash/ overflowin’ with the spirit and a bible on the dash/ Well we pulled the whole thing over for the flashin’ reds and blues/ The police come to the window and he said, Have you heard the news?/ He said don’t get smart with me, boy; why you doin’ 95?/ My foot is heavy with redemption/ I’m just blessed to be alive!/ He said I oughta pull you out a there and beat you black and blue/ I placed my hand upon the good book and said, What would Jesus do?/ It’s better than insurance, registration, or lyin’/ It’s better than these fake IDs I have to keep buyin’/ It’s even better than an envelope stuffed with cash/ They always said it’d save me, that old bible on the da-ash.”

Lund, who grew up in Southern Alberta on his family’s ranch, started playing with his indie band called The Smalls, which managed to sell 35,000 units by touring all over Canada, the U.S., and Europe. He eventually began performing as the Corb Lund Band, but then morphed into Corb Lund & The Hurtin’ Albertans, and by 2009, he ended up signed to a deal with New West Records, home to artists such as Dwight Yoakam, Steve Earle, and Kris Kristofferson.

He’s now got nine studio records to his name, most recently Things That Can’t Be Undone, released in October of this year. He’s also a five-time JUNO Award nominee, and he won a JUNO—the equivalent of the Canadian Grammy Award—in 2006 for “Roots & Traditional Album of the Year—Solo” for his record Hair in My Eyes Like a Highland Steer.

This Wednesday, Dec. 2, Lund and company plays a SLO Brew show under the aegis of Numbskull and Good Medicine Presents (7:30 p.m.; all ages; $15 presale or $18 at the door). Joe Koenig, whose record Bleed Like You Bleed won this year’s New Times Music Award for Album of the Year, will open the show.

Lund’s new album has been garnering great reviews and making its way to U.S. audiences. NPR Music premiered his song about Iraq War veterans, “Sadr City,” and praised the album, saying it “expands Lund’s sound and creates ideal settings for his varied narratives,” also adding that it’s “a high mark of a long career.”

He’s still not super well known in the U.S., but that’s changing. Rolling Stone including him in its “22 Best Things We Saw at Americana Music Fest 2015.” From rockabilly to Western swing, cowboy balladry to country-rock, and even some well placed yodeling, Lund puts on a great live show.

“My whole life is sort of a dichotomy between being a cowboy kid and living in a city,” Lund said in press materials. “I guess that informs my music too.”

Also at SLO Brew this week is the always popular and entertaining Karaoke Contest this Saturday, Nov. 28 (7:30 p.m.; all ages), hosted by Brotha “C,” with a panel of celebrity judges. A $500 grand prize will go to the singer with the best pipes and performance.

Fiddlin’ for a cause 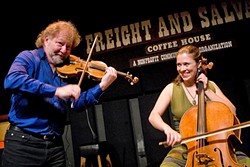 This Tuesday, Dec. 1, enjoy an evening with Alasdair Fraser & Natalie Haas in a benefit concert for Templeton Schools Fine Arts Programs at Templeton High School (7:30 p.m.; all ages; $30 general admission or $15 for students and children, available at Matt’s Music, Stage & School, or by calling 237-0054).

“This is our first benefit concert of the current school year held at the Templeton Performing Arts Center,” said organizer Matt Franscioni. “This program is unique in that other than artist fees, all proceeds go directly to music and fine arts programs in the Templeton Unified School District.”

Featuring Scotland’s premier fiddle ambassador Alasdair Fraser and talented Californian cellist Natalie Haas, the two offer up “dazzling teamwork, driving rhythms, and their shared passion for improvising on the melody and the groove of Scottish tunes, [which] has helped reconstruct and revive the Scottish tradition of playing dance music on violin and cello,” Franscioni added.

See and hear some great music for a great cause. 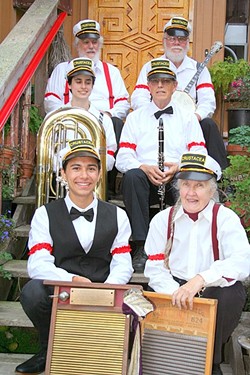 Sometimes one washboard isn’t enough! The Crustacea Jazz Band, which plays the song and dance music of 20th century America, will bring their upbeat double-washboard sounds to the SLO Farmers’ Market next Thursday, Dec. 3, at the corner of Osos and Higuera.

“In 2009, a clutch of crustaceans washed in from Morro Bay, found themselves some instruments, and formed The Crustacea Jazz Band,” according to their bio. “We’re essentially a local jazz band, playing the song and dance music of 20th century America all over SLO County. We play the jazz that originated in New Orleans, in Memphis, in Chicago, in San Francisco, as well as spirituals, gospel music, blues, and early pop tunes. Look for the Crustaceans playing their upbeat, happy, humorous, and romantic music. Check out the umbrellas of the ‘second line’ dancers and join in the fun.”

Get a dose of Southern soul and country when The EJ Cox show comes to Tap It Brewing Company this Friday, Nov. 27. Fronted by Florida native turned Santa Barbara resident EJ Cox, who recently sold-out a CD a release party at Maverick Saloon in Santa Ynez, the show “is a celebration of all things Americana, country, and ‘old soul,’” according to Cox, who’s put together “an all-star band of very seasoned musicians including an amazing horn and fiddle section, three members of the Jeff Bridges and The Abiders Band, guitarists that have played with Clint Black and Roger Miller, and featuring Nadia Christine Duggin on backup vocals (Miley Cyrus, Robin Thicke).” Expect “some Cox originals, rockin’ country classics by Johnny Cash and Hank Williams, and also some old soulful rhythm and blues tunes that are sure to have everyone dancing by the fire pit well into the night.”

Santa Barbara’s Rent Party Blues Band performs “lesser known blues songs that came out of Chicago and Memphis during the 1950s and ’60s as a way to broaden our generation’s perspective of the blues,” according to the band. Formed in 2014, “The band chose its name as a way to evoke the ‘let loose and get down’ spirit of a house party, rent party, or juke joint. Still in their first year of performances, Rent Party Blues Band is building directly from their influences and innovating upon them to create a sound that’s both refreshing and preserving true blues music.” See them on Saturday, Nov. 28, at Frog and Peach (9 p.m.; 21-and-older; free).

Being billed as the Central Coast Global Climate March and Float, this Sunday, Nov. 29, at Back Bay Inn in Baywood Park, Los Osos, join your ecologically likeminded friends and neighbors from 11 a.m. to sunset to “celebrate the art of planet protection at this free nonprofit event,” the goal of which is to “create and support positive action on climate change locally and globally in a festival-like and nature-enhanced setting,” according to organizers. “The Baywood Climate Fest is one of 1,600-plus gatherings world-wide planned to capture the attention of world leaders as they convene in Paris for the UN Climate Change Conference.” In addition to speakers and the plan to form a giant peace sign with people floating in the bay (bring your kayak!) and a giant green heart with people on land, the event also features a “Sound Bath” of hand pan instruments and crystal bowls played by Tim Costa and Justin Perkins, plus music by Zongo All-Stars, Mama Tumba, and Cayucos Players.

You might never have seen the show, but I bet you know the songs: “We’re In The Money,” “Lullaby of Broadway,” “Shuffle Off To Buffalo,” “Dames,” “I Only Have Eyes For You,” and of course the title track, “42nd Street.” This Monday, Nov. 30, Cal Poly Arts presents 42nd Street, the “quintessential backstage musical comedy classic” (7:30 p.m.; tickets are $60 to $90, available by calling 756-4849 or online at calpolyarts.org). The new production is directed by co-author Mark Bramble and choreographed by Randy Skinner, the team that staged the 2001 Tony Award-winning revival. Based on Busby Berkeley’s 1933 movie, it “tells the story of starry-eyed dancer Peggy Sawyer who comes to New York City and lands a part in the chorus of a Broadway musical. When that show’s leading lady breaks her ankle, young Peggy takes over and becomes a star.” PCPA director Erik Stein will present a free pre-show lecture, beginning at 6:30 in the PAC Pavilion. 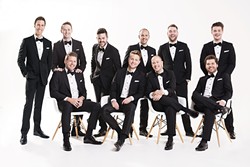 So. Many. Tenors! The Ten Tenors bring their “Home for the Holiday” concert to the Performing Arts Center this Tuesday, Dec. 1 (7:30 p.m.; tickets are $40to $90, available by calling 756-4849 or online at calpolyarts.org). The Australian singing sensations will offer up songs such as “Joy to the World,” “Sleigh Ride,” “White Christmas,” “Amazing Grace,” “Winter Wonderland,” “Feliz Navidad,” and many more. Gushed Broadway World, “Off-the-charts vocals, irresistible charisma, and uncontainable high energy, … I have seen a myriad of other tenor triplets over the years, but in this case, size really does matter and TEN truly outshine all who have come before.”