Core values: Food History Project brings in the man who knows apples better than Adam for a presentation

SLO Provisions restaurant participates in Nonprofit Mondays, donating 10 percent of dine-in sales to a rotating cause. SLO Provisions is located at 1255 Monterey St., SLO; learn more at sloprovisions.com. Mike Cirone, of Cirone Farms, sells apples and stone fruit at the Morro Bay Farmers' Market at Spencer's Fresh Market on Thursdays, from 2 to 4:30 p.m; in downtown SLO on Thursdays, 6 to 9 p.m; SLO Madonna Road on Saturdays, 8 to 10:45 a.m; and at Baywood farmers' market in Los Osos on Mondays, from 2 to 4:30 p.m. Visit cironefarms.com for more information. To learn more about upcoming Food History Project of SLO County events, visit winehistoryproject.org.

It's officially the start of apple season.

So I learn at the Aug. 12 Food History Project lecture at SLO Provisions. Titled: "Apples, Apples, Apples. Who can eat just one a day?" the 1 1/2-hour apple discussion, which cost a mere $10, proves to be deliciously educational.

I'm sitting at the darling SLO Provisions on Monterey Street with a handful of fellow apple enthusiasts hungry for information on our favorite fruit. Apple discussion and a cafe meal—this is my kind of pairing.

I learn I'm among other apple lovers in the room who have closely held childhood associations with apples. My family would drive us six kids in the Vanagon from the East Bay to Apple Hill in Placerville. There, we picked the apples straight off the trees, using tall basket poles that can only be described as lacrosse sticks. Afterward, we sat on hay bales, staring up at puffy clouds as we savored the sweet and tart caramel apples from the outdoor stand. A jug of apple cider was apportioned among us in Tupperware mugs before the drive back home. 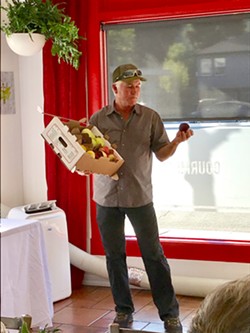 Some of my fellow apple lovers attending this lecture share that they grew up picking apples in the fall on the East Coast. I learn that that region's apples may not be as flavorful as our local varieties, due to long, humid summers and oversaturation of rain. Of course East Coast soil contains different rocks than ours, and luckily for us, See Canyon is the perfect, moisture-rich growing region for apples.

Mike Cirone, our professor on this veritable back-to-school day, is essentially "Apple Yoda." As one of the original apple growers in SLO County, he's as close as I've ever gotten to Adam and Eve's original apple. Cirone grows more than 50 varieties of apples in See Canyon, a dizzying number of delicious types—from the Braeburn to the Empire to the diabetic-friendly Bellflower.

During the lecture, Cirone shares that he weens his young trees off irrigation after a few years, then relies on dry farming, allowing rainwater to be their primary source of irrigation as they grow independent. Some of Cirone's trees are more than 100 years old.

He remembers a time when SLO apple land used to mingle with red strawberries, when just a handful of families were planting apple orchards—most notably for Cirone, Margaret DeVaul from the See Canyon Fruit Ranch, which was established 1894. 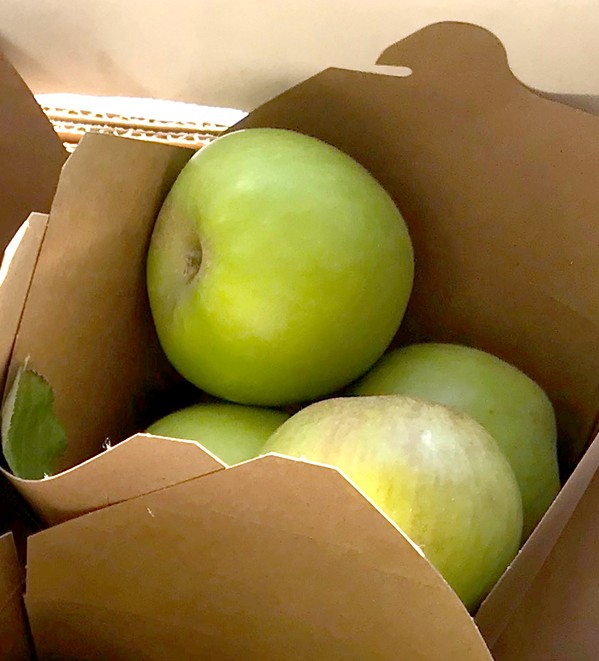 "I kind of came along at the right time," says Cirone, a SLO native.

In 1983, he was fresh out of Cal Poly's Fruit Science Program, and the historical apple region of See Canyon appealed to him.

"They were all kind of tired of growing apples, and I was energetic," he says.

"I got this great deal," he remembers of his beginnings. "A full house and an orchard for a hundred bucks a month."

One of the attendees, a 72-year-old local, shares that she's been visiting See Canyon orchards since she was 5. Her grandparents would buy cases of apples.

"Most of the time they kept them for eating of course," she says, "but my grandmother would can them."

Cirone goes on to describe the intricacies of the apple business—from what it takes to run such an operation (an endeavor he welcomes with the help of two orchard workers and maybe, one day, his son) to deciding which apples grow best in the See Canyon climate. All is dependent on a good winter chill, the right balance of moisture and heat, and meticulous care.

"My son dabbles in cider," he says.

Regarding the cider craze of the last decade, Cirone is more about selling "fresh eating apples," but he smiles wide when he tells us his son is motivating him to continue with distribution and wants to help.

Cirone believes his orchards can survive a drought and continue to produce fruit. He has good well water on his 125 acres, and he's able to get top price for his product. As for planting new varieties, he's not really interested.

"We're pretty happy right now with what I have," he says.

In late fall, Cirone Farms will have avocados, and by winter, he grows Satsuma mandarins and sweet, creamy white sapote (a citrus relative native to Central America and Mexico). Fall brings the first harvests of the early apples, then the mid-season varieties, and finally the late-season varieties. Late in the season, locals can get a taste of the Gold Rush apple, which Cirone says has the reputation of being an ugly, low-hanging apple on the outside but marvelous and surprising on the inside. 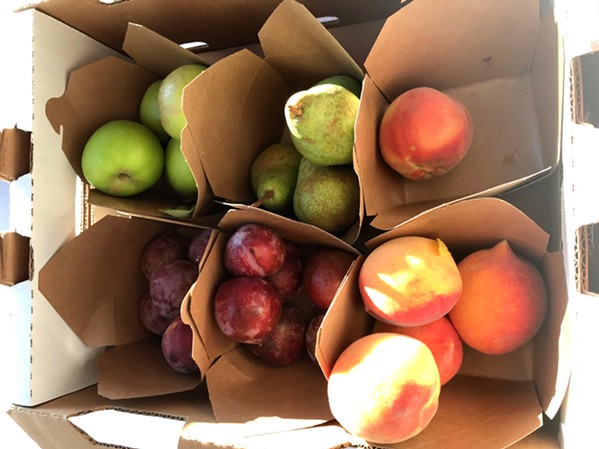 Cirone teaches us the techniques he uses to fend off the literal worm in the apple, aka the codling moth—sniper-like moves that involve pouncing on the larva with expensive certified organic spray at just the right time.

We also learn that in order to grow apple trees in these parts, you can't be lazy. You need to prune, prune, prune; thin those clusters of five to one or two (or else you'll have sad little marbles on your trees); and make use of a cover crop such as bell beans. Cirone buys nitrogen fixing 50-pound fava bean bags to surround and protect his orchard.

We also hear from Cirone about technological advances in the world of apples, most notably farther up north. Cirone mentions that in Washington, machines will be taking the place of pickers—no bell-bottom-wearing, lacrosse-stick wielding pickers in those orchards.

Such a thing won't ever happen at Cirone Farms. With so many varieties, the trees must be hand-picked, he says.

The Apple Hill picker in me breathes a sigh of relief. I simply cannot fathom the thought of machines doing the picking. Δ