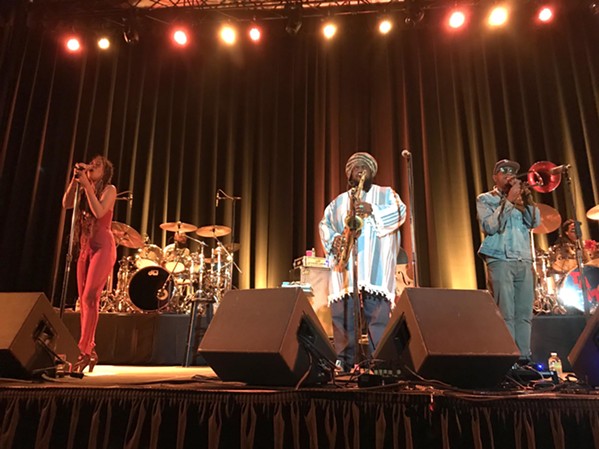 "This song has five melodies going at once, a symbol for what the world will look like when we all come together," a pensive Kamasi Washington told a captivated crowd in SLO's Fremont Theater, before he launched into "Truth," a hair-raising, hypnotic number featuring intricately interwoven voices and instruments.

The tune came about halfway through Washington and his band's transcendent set on Oct. 20, which graced the ears of SLOcals thanks to a stop here along the contemporary jazz legend's tour in support of his latest release, Heaven and Earth. Even luckier for me, as a local press member, I was offered a front row seat about 6 feet away from the man.

The energy was intense in the best possible way. In case you're unfamiliar with his work ... Washington, a Los Angeles-based tenor saxophonist and producer, is perceived by many as something of a modern day John Coltrane, blending unassailable technical prowess with an entrancing spiritual striving and vision. In addition to his own works, which include his breakthrough album, the universally acclaimed The Epic (2015), he's also collaborated with the best of the best musicians in LA, like Flying Lotus, Thundercat, and Kendrick Lamar, on their respective masterpieces. 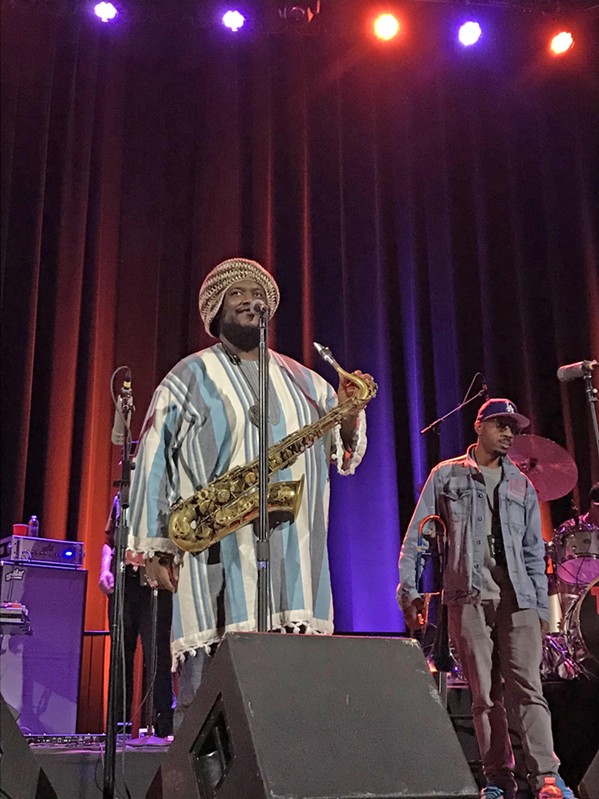 Washington came on stage as a sextet, backed by Ryan Porter (trombone), Miles Mosley (upright bass), Ronald Bruner Jr. (drums), Tony Austin (drums), Patrice Quinn (vocals), and Brandon Coleman (keyboards). Coleman also opened for Washington, and he nearly stole the show with his dazzling virtuosity, showmanship, and infectious joy. He was a hit with the ladies in the audience, for sure. But the wonderful truth here is that all seven on the stage were world-class musicians. Washington was generous in empowering each of them to shine right from the beginning with extended solos—almost letting them get loose and comfortable before he even was. Mosley particularly awed on the upright bass, his inspired fingers flying up and down its giant neck with perfect rhythm and precision.

I was immediately struck by Washington's talent as a bandleader. Even at the show's wildest moments, he was keenly aware of the path of the music, guiding it in the direction he wanted—even with just body language and eye contact. Being the physically largest man on the stage, I pictured Washington as almost a force of gravity up there, sculpting the musical vibrations emanating from his bandmates.

Washington's songs tend to feature a simple melody or riff that serves as a motif, which then progresses into wild explorations of the various instruments, where it becomes hard to tell how much is improvised as opposed to part of the song structure. It made for a remarkable ebb and flow of energy that somehow always felt grounded. That was maybe the coolest part about the show: The musicians on stage felt totally a part of the audience. So humble and down to earth, yet so incredibly great at their crafts, taking you with them on this musical journey. Porter on trombone was especially lovable, donning a spaced-out-looking smile as he soaked in the sounds around him.

Before Washington played "Truth," he distilled into words what I believe is his essence. As a musician touring around the world, Washington said, he's seen all kinds of people and places. All of us are human beings expressing our vastly different experiences with life, culture, and environment. We cannot get trapped in our narrow worldviews and allow them to divide us. "Diversity should not be just be tolerated," he concluded with conviction. "It should be celebrated." Washington's efforts to reflect the peace and togetherness he envisions for the world in his music should be celebrated, too.