The last Form 460 campaign finance disclosures before the Nov. 4 election were released on Oct. 23, and it’s become readily apparent that the race for the District 4 seat on the San Luis Obispo County Board of Supervisors in 2014 is one of the costliest—and more than likely the costliest—supervisorial race in SLO County history. 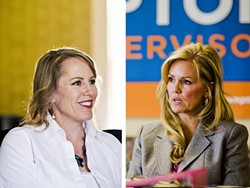 Precise figures for past campaigns are difficult to verify completely, but the campaigns of Compton and Ray have now raised more than $675,000 in combined cash, nonmonetary donations, and loans since the campaign’s inception in 2013.

Ray, an Arroyo Grande educator and the current District 4 supervisor, has raised a total of $277,958.74 in cash, nonmonetary donations, and loans from the beginning of her campaign through Oct. 18.

Compton, a Nipomo agricultural businesswoman, has raised a total of $397,637.87 in cash, nonmonetary donations, and loans in the same time period.

When examining just monetary donations to their campaigns, the two candidates are more evenly matched; Ray has raised $265,337.85 in cash donations through Oct. 18, and Compton’s figure is $236,438.

“We have worked within our budget the entire time, and we’ve had enough money to do what we wanted to do,” Ray told New Times. “That’s what good budgeting looks like, and that’s how I operate as an elected official—you can’t just spend and spend and rack up debt like that.”

Compton didn’t respond to a request for comment from New Times.