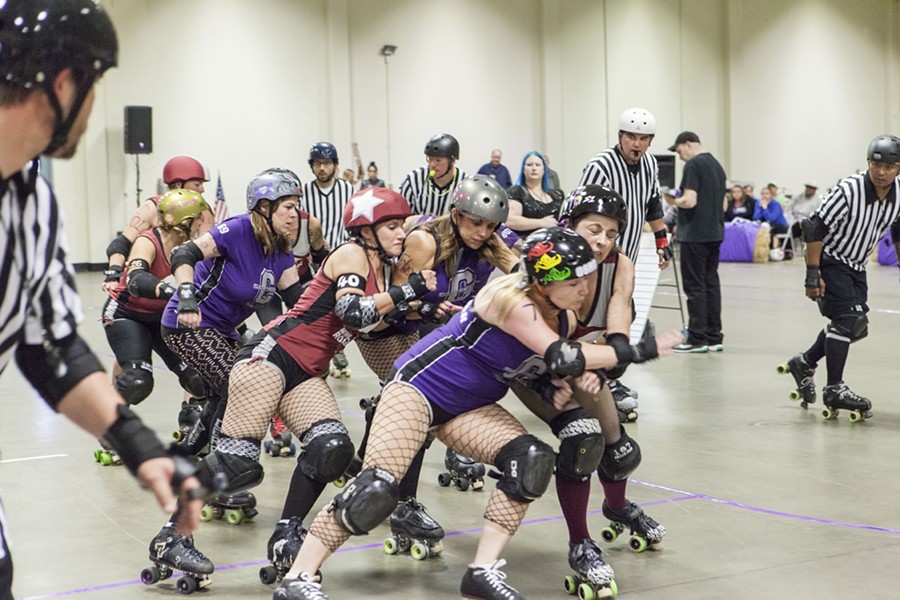 Truly, is there anything better than cotton candy? It’s not just the unapologetic frankness of spun sugar dyed bright pink or blue that I appreciate; it’s what the presence of cotton candy at an event suggests. Cotton candy says you can be yourself here, you don’t have to put on airs or pretensions, don’t have to apologize for being a red-blooded American who can only choke down a salad if it’s coated in a thick layer of saturated fat pretending to be dressing.

Cotton candy loves you just the way you are—sticky fingers, blue teeth, diabetes, and all. Or so I tell myself when I buy a giant bag of it within minutes of entering the Santa Maria Fairpark Convention Center on the evening of Saturday, March 29. The cotton candy was being sold at a booth liberally stocked with Cal Skate Roller Derby merchandise, including cowbells and whistles, indicating it was going to be a noisy evening.

Because it was my first Cal Skate bout—despite the fact that I was about to watch the kick-off for the team’s fourth season—I immediately noticed a few differences from Central Coast Roller Derby bouts. First and most obviously: the presence of cotton candy. Second and perhaps most surprisingly: the size and boisterousness of the crowd. Cal Skate Roller Derby seems to have acquired one hell of a following, and that following is all ages; it’s loud; and it’s very, very proud of its team.

In fact, there was an entire VIP section, not occupied by parents or other proud relatives, but by the Black Lake Gyros, a group that member Bonnie Eisner says is dedicated to “fun and fellowship.” Cal Skate Roller Derby gave a presentation at one of the group’s meetings to recruit fans, and the efforts paid off in the form of nearly two dozen occupied chairs. In fact, the Black Lake Gyros have pledged to attend each of Cal Skate’s games this season, the next one being on May 17.

I’d also read on the Cal Skate Facebook page that this was to be Dolly Thrasher’s final game—two games, really, since Cal Skate played back-to-back matches, first against the Wine Town Rollers from Temecula and then against Nor Cal Rollergirls from Chico.

Mary, who happens to be sitting in front of me, is cheering loudly and frequently, applauding Cal Skate’s stellar defense. She started coming to roller derby matches when her niece, Kung Fu Manda, joined the team several years ago. Though her niece wasn’t playing until the second bout, Mary was no less proud of her hometown team.

“It’s Dolly Thrasher’s last game and she’s so good,” Mary observed, between rounds of cheering for Thrasher’s undeniably effective defensive skills. “It’s exciting for Santa Maria. This is my excitement!”

While most players choose names before ever playing in a real bout, I notice a certain appropriateness to several of the derby names, which are, frankly, one of my favorite aspects of the sport. Case in point: Chika Vroom is freaking fast, and Dolly Thrasher is brutal. Another big difference between Cal Skate and CCRD is that the refs seem less inclined to use their whistles; there were fewer power jams, fewer instances where half of both teams’ athletes were watching from the bench, and it made for a much more enjoyable—and admittedly, slightly more brutal—game, ending in an unofficial final score of 192-126 in favor of the home team.

I was expecting an entirely different team to roll out onto the track for the next bout, but it was pretty much the same team with the addition of a couple of players who sat out the first game. Initially, I was a little worried this would compromise Cal Skate’s ability to keep up with a fresh, rested team, but my concern lasted all of five minutes. At the end of the first 15 minutes—derby bouts are comprised of two half-hour rounds with a brief halftime in between—the score was 127-0 in Cal Skate’s favor. And I was quickly realizing that while Dolly Thrasher dominated on defense, the team boasts a fairly well-rounded and incredibly talented field of jammers. Die’Mon, who sold raffle tickets during the first bout, dominated as jammer during the second with quick footwork that easily overwhelmed the other team’s defense. And SS BattleHipz was a small, quick, and aggressive jammer as well. It’s unusual for me to walk away from a match shaking my head over the breadth of talent—usually there’s one obvious standout jammer—but that seems especially helpful in a sport where players are prone to breaking, twisting, crunching, and otherwise damaging bones and ligaments.

And the final score of 308-97 certainly indicates that Cal Skate is doing something right.

“There are no balls in roller derby, are there?” quips the announcer who somehow managed to talk through both bouts, as well as the period before and after, and halftime.

And with that final philosophical turn, it was time to throw away the empty bag, now slick with wet blue cotton-candy residue, and pencil May 17 into my datebook. Of course, if you can’t wait that long, CCRD has a double header coming up in Paso Robles on Saturday, April 26.

Managing Editor Ashley Schwellenbach loves any food you could reasonably find at a fair. Send deep fried sugar to aschwellenbach@newtimesslo.com.