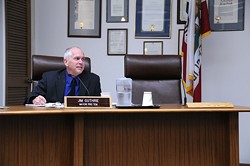 He didn’t show: Ed Arnold, the Arroyo Grande city councilman accused of burglary, domestic violence, and assault with a deadly weapon, missed the first city council meeting since his arrest on Dec 15.

Steven Adams, the city manager, said Arnold told him he would duck the meeting to avoid the press. Television cameras, broadcast reporters, and print journalists crammed the entire back wall of the council chamber. When it became obvious Arnold wasn’t going to attend, they left.

No one mentioned Arnold or his situation during the meeting, but many in the council chamber quietly talked about him beforehand. “Is asshole going to show up?” asked a city worker in a well-tailored grey suit. “The councilman is not coming,” was the curt reply, whispered by a nearly identically dressed man.

Ignoring Arnold’s empty chair, the council discussed a new towing vender for the city and a possible move for the farmers’ market. The only heat at the meeting besides Arnold’s absence came from the mention of a possible new city hall to replace the current cramped quarters.

Arnold needs to show up at city council meeting soon if he wants to keep his city council job; he can be removed from office if he doesn’t attend any meetings for 60 days.