To get a feel of what to expect from Dwight Yoakam’s show this Sunday, Aug. 24, at Vina Robles Amphitheatre (8 p.m.; $45.95 to $66.45; vinaroblesamphitheatre.com), I’ve been watching videos of him performing songs from his newest album, 2012’s 3 Pears, at The Live Room. The record reached No. 1 on Billboard’s Americana chart and helped him garner the Americana Music Award for Artist of the Year in 2013.

The record also marked his return to Warner Bros. Records after a few years as an independent artist, and, on it, the 15-time Grammy Award nominee, and two-time Grammy winner, demonstrates how he’s managed to chart more than 30 singles on Billboard’s Hot Country Songs chart, sell more than 25 million records, and have nine of his 13 albums go platinum, including 1993’s This Time, which sold triple platinum!

Of course, the days of the youthful Yoakam, in painted-on blue jeans, singing Buck Owens-inspired songs from his debut Guitars, Cadillacs, Etc., Etc. and his follow-up, Hillbilly Deluxe, are now gone, replaced by a seasoned performer and veteran of 23 movies, including his breakthrough role in Sling Blade, as well as Panic Room, The Three Burials of Melquiades Estrada, Wedding Crashers, and Crank. To say the man has had an amazing career is clearly an understatement.

Yoakam was born in Kentucky and raised in Ohio, excelling in both music and drama in high school, where he starred as the lead, Charlie, in Flowers for Algernon, among other roles. After a short stint at Ohio State, Yoakam dropped out and headed to Nashville. He was not well received. The town had turned its taste toward pop “urban cowboy” music, and Yoakam’s honky-tonk, or as he called it “hillbilly” music, was out of vogue. He set out for Los Angeles, where he found a home playing punk clubs alongside acts like The Blasters, Los Lobos, and X.

Eventually, country music tastes caught up to Yoakam, and soon he was singing a duet with his idol, Buck Owens; Johnny Cash was naming him as his favorite country singer; mainstream magazines such as Time (“A Renaissance Man”) and Vanity Fair (“Yoakam strides the divide between rock’s lust and country’s lament”) were singing his praises.

No matter what he decides to perform, he’s guaranteed to entertain. He’s Dwight “Freakin’” Yoakam, man! The White Buffalo, an enigmatic mountain of a man who writes poignant and gorgeous songs, will open. He’s played SLO Brew a few times, but his star’s really starting to rise. Two days after opening for Yoakam, The White Buffalo plays Jimmy Kimmel Live on Tuesday, Aug. 26.

Philadelphia’s finest eclectic, indie, alt-rock act Man Man hits SLO Brew on Thursday, Aug. 21 (8 p.m.; all ages; $13 presale or $14 at the door), with Landlady opening. Their newest album, On Oni Pond, is full of great songs like “Head On” and “Loot My Body”—tracks that are immediately irresistible.

It’s the band’s fifth full-length album, and it proves once again that it’s impossible to pigeonhole this collaboration between front man Honus Honus, drummer Pow Pow, and their merry band of musicians.

“With this album we got to do something that very few bands or creative people get to do, which is a reboot, and one that feels natural,” Honus Honus said in promo materials.

Captain Beefheart and Frank Zappa seem clear influences, but I hear Talking Heads in there, as well as hints of hip-hop, psychedelia, and roots rock. Each track brings new surprises.

“This is a strange and beautiful record, but it’s also head on and fearless,” added Honus Honus. “It’s not a record that’s going to flirt with you; this is a record that’s asking you out. If you get into bed with us, there’s going to be a relationship.”

As the band notes, this is a “beautifully weird and unforgettable collection of songs. From the pounding syncopated drumming, psychedelic organ, and impassioned crooning of ‘Pink Wonton’ to the sneering new wave dub of ‘King Shiv’ and the big beat bratty swagger of ‘Loot My Body,’ this is an undeniably ambitious band reborn to new, focused greatness.” Don’t miss this one!

Brooklyn-based Landlady is an adventure pop group playing the songs of Adam Schatz (keyboard and horn provider for the likes of Little Joy, Hospitality, Sleigh Bells, Those Darlins), backed by a six-piece power band.

Also at SLO Brew this week, Boris plays Friday, Aug. 22 (7 p.m.; all ages; $14 presale or $15 at the door), with Marriages opening. Boris is a Japanese cult favorite sludge/doom rock trio that takes their name from a song on grunge godfathers the Melvins’ Bullhead album.

See Eric Lindell this Sunday, Aug. 24, with (7 p.m.; 21-and-older; $15 presale or $17 at the door). His music is best described as “Southern soul music, infused with R&B and a touch of New Orleans funk and blues, glazed with a taste of country.”

Ottmar Liebert & Luna Negra play SLO Brew this Tuesday, Aug. 26 (6:30 p.m.; all ages; $30 presale or $35 at the door; VIP meet-and-greet ticket are also available). “Born in Cologne, Germany, to Chinese-German father and Hungarian mother, Liebert began playing guitar at 11, and traveled extensively through Europe and Asia intent on fully absorbing each musical tradition he encountered,” according to his bio. In 1989, he founded Luna Negra, and since then, he’s achieved global success.

Cat’s in the Cradle?

I’ve always wondered if Jim Croce’s lyrics to “Cat’s in the Cradle,” a sad lament about a wayward father made famous by Harry Chapin, was somehow prescient of Croce’s relationship—or lack thereof—with his own son, A.J. Croce. 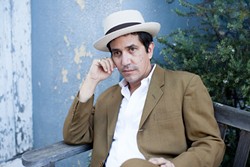 “My child arrived just the other day/ He came to the world in the usual way/ But there were planes to catch and bills to pay/ He learned to walk while I was away/ And he was talking ’fore I knew it and as he grew/ He’d say I’m gonna be like you, Dad/ You know I’m gonna be like you,” the song goes.

A.J. was born on Sept. 28, 1971, and his dad died in a plane crash on Sept. 20, 1973. It was but one challenge faced by A.J., who, at age 4, was completely blinded due to a brain tumor. By age 10, he gradually regained vision in his left eye. In the meantime, he was learning piano and was given music by Ray Charles and Stevie Wonder as inspiration.

Even though he never knew his father, he clearly acquired some of his dad’s musical talent. A.J. Croce has been playing professionally since he was first paid $20 to play a Bar Mitzvah party at age 12 (or maybe when he opened for B.B. King at age 18; money’s money, right?). Since then, he’s collaborated with Ry Cooder and David Hidalgo, and opened for Carlos Santana, Rod Stewart, Aretha Franklin, Willie Nelson, Lyle Lovett, James Brown, Ben Harper, Dave Matthews, Ray Charles, and Earth, Wind and Fire.

This Saturday, Aug. 23, at Castoro Cellars Winery, A.J. Croce plays a special benefit concert hosted by Salon Roux for Studios on the Park’s “Kids Art Smart” program (6:30 p.m.; $50 tickets; VIP tables include wine and dinner, and are $250 for two people, $500 for four people, and $750 for six people. Tickets are available at Salon Roux by calling 239-9499 or by emailing info@salonroux.com). The Janks will open the show.
Additionally, Thomas Hill Organics Bistro will be serving a dinner consisting of Paella accompanied by organic mixed greens, roasted seasonal vegetable, and date flan tartlets for $15. Castoro Cellars wine will also be available for purchase.

The Baywood Navy (Their motto is “We never sail in water deeper than we can stand in”) has set a course for Boatzart 2014, the annual music festival in Baywood Park in Los Osos this Saturday, Aug. 23. It’s a show you can attend by land or sea, and lots of folks boat or kayak in to catch the fun.

The day begins at noon with Rebecca Troon and the Honeysuckle Possums, who’ll play until 1 p.m. Then dig the retro sounds of The Weavers (Remembered), who will play Weavers songs in the gardens of the Back Bay Inn from 2 to 3 p.m. At 3 p.m., check out the Gipsy All-Stars. Next up is the amazing and fun Gypsy jazz and tango of Cafe Musique playing from 4 to 5 p.m. Finally at 5:30 p.m., headliners the Zongo All-Stars will pump up the crowd with their Cali-Cubano music.

The concert is free! There will also be free cookies for all on the famous Baywood Navy Cookie Boat; and beer, wine, soft drinks, and barbecued hamburgers, hot dogs, and more will be available for purchase.