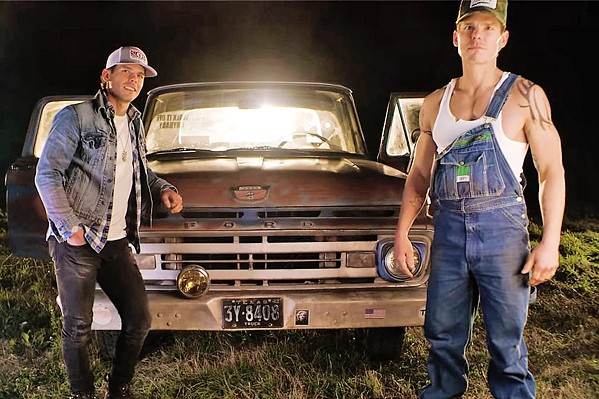 Smith is normally a well-mannered Texan, father of three, and online and touring sensation with a massive fan base called the "Yee Yee Nation," built through his relentless touring schedule and social media following of 7 million fans. His first No. 1 hit on the country charts was "Backroad Song," which he followed with the No. 5 hit, "If The Boot Fits."

Smith told countrycountdownusa.com, "Earl started as a promotional tool," and that he and his brother were trying to make a viral YouTube video. Smith put on some overalls, boots, trucker cap, and fake tattoos. There was "literally no thought to any of this," he said, "besides I'll ad lib a day in the life of this country boy. So I started at the beginning: 'I wake up, put a good dip in, crack a cold one, get dressed, start the day.'"

"Then I thought Earl needs a song. So I wrote a song called 'The Country Boy Song,' that was his day put to music. That song we released as a music video, went twice as viral. At that point, I thought Earl needs to be part of the show. We have not looked back since that day."

Think of it as a twofer! A fine Texas troubadour and his backwoods cousin!

Also at Fremont, rapper Blueface, next Thursday, Oct. 24, has sold out, but he's added another date on Wednesday, Oct. 23 (doors at 8 p.m.; all ages; $40 at Boo Boo's and eventbrite.com). Coyotes and Flash Gotti will open the show.

Fans of turned-on-its-head bluegrass, folk, and country music will want to get themselves to the Painted Sky Concert Series this Friday, Oct. 18, for an amazing double-bill featuring the Cache Valley Drifters and Crary, Evans, and Barnick (7:30 p.m.; all ages; $25 at Boo Boo's, Ball & Skein, or by calling (805) 927-8330).

The evening starts with Crary, Evans, and Barnick in an intimate acoustic concert of new songs and old stories. Dan Crary, 79, is an amazing flat-picker and bluegrass musician. He's also a retired speech communications professor from Cal State Fullerton who knows a thing or two about the art of being a raconteur. They put on quite a show. 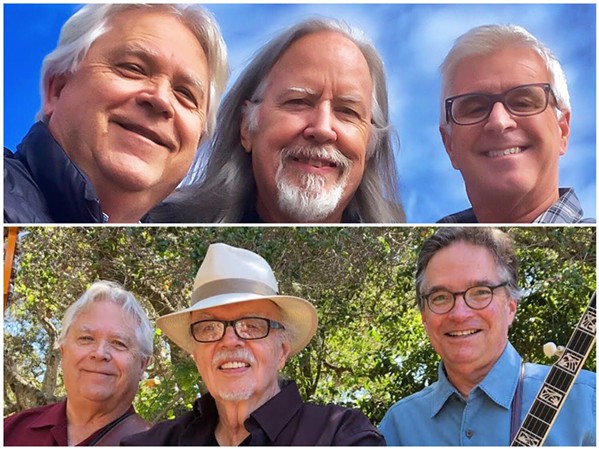 If you haven't heard of the Cache Valley Drifters, welcome to California for the first time! They started back in 1972—a bunch of hippy kids who liked picking and grinning and unleashing bluegrass instrumentation on songs by the likes of Paul Simon, Etta James, and Cream! They were folk icon Kate Wolf's backing band, and though they had a few different members over the years, their current lineup—Bill Griffin (mandolin, guitar), Wally Barnick (electric bass, and yes, he's doing double duty in both bands), and Mike Mullins (guitar and mandolin)—has been playing together for decades. The trio also weaves amazing harmonies. Prepare to pick your jaw up off the floor.

Don't forget that Numbskull and Good Medicine Presents has Greg Loiacono (of The Mother Hips) playing this Thursday, Oct. 17, at The Siren (7 p.m.; 21-and-older; $15 presale at Boo Boo's and eventbrite.com or $20 at the door), with openers Scott Hirsch and Lauren Barth. These are three fine songwriters. I'm guessing this will be a warm and intimate evening.

If you'd hoped to see country singer Cody Johnson on Friday, Oct. 18, at the Madonna Expo Center, it's sold out. 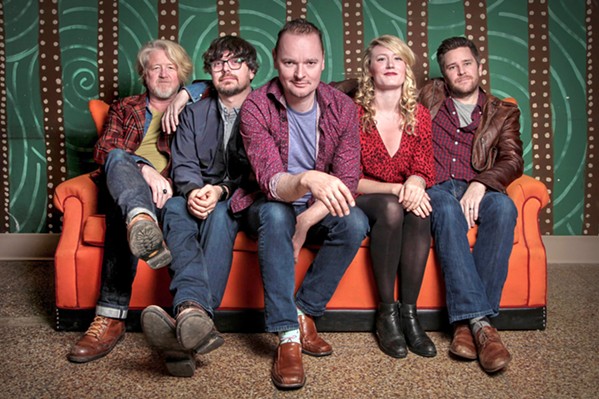 Celtic band Gaelic Storm plays The Siren on Sunday, Oct. 20 (7 p.m.; 21-and-older; $25 presale at Boo Boo's and eventbrite.com or $30 at the door). This multi-national group has been together for 20 years and is currently touring in support of Go Climb a Tree.

According to press materials, the band brings in a diverse crowd: "The country-music folks adore the storytelling, the bluegrass-heads love the instrumentals, Celtic fans love their devotion to tradition, and the rockers simply relish the passion they play their instruments with." 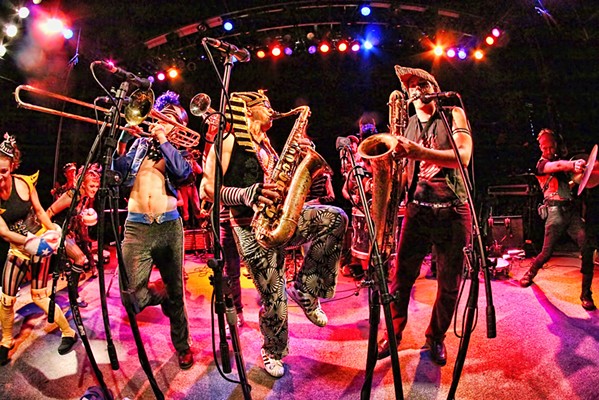 Put Sure Sure on your radar. The art pop band returns to the Rock next Thursday, Oct. 24 (7:30 p.m.; 18-and-older; $16 at Boo Boo's and slobrew.com). The East LA act has amassed more than 30 million combined streams. They describe themselves "as a mix between Steely Dan and the Talking Heads, 'we take inspiration from The Beatles, D'Angelo, and Feist among other artists that I can't remember right now.'" 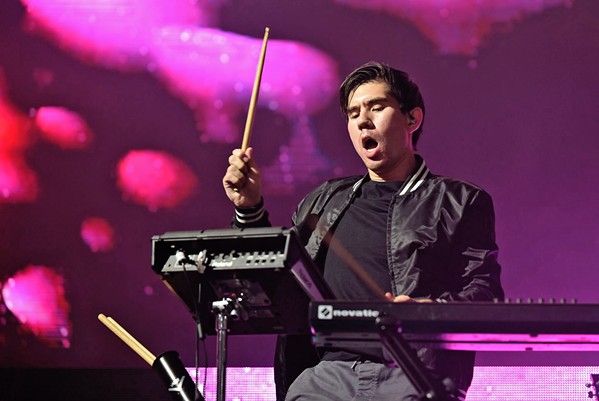 This tour is a follow-up to his wildly successful Gravity Tour that featured "Tie Me Down" featuring Elley Duhé, which hit No. 2 on Spotify's U.S. Viral Chart, and "Remember" featuring Zohara, which topped Billboard's Dance Club Songs chart. 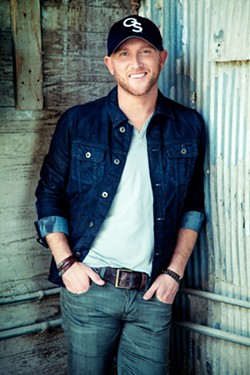 Squeeze those last drops out of summer...

Vina Robles Amphitheatre hosts country hit-maker Cole Swindell on Friday, Oct. 18 (8 p.m.; all ages; $55 to $75 at vinaroblesamphitheatre.com), with special guest Alisan Porter. The platinum-selling recording artist has 11 No. 1 hits under his belt and is touring in support of All of It, his third album that in 2018 debuted at No. 1 on the Billboard Country album chart and No. 7 on the Billboard Top 200.

Jazz fans, Cal Poly has added other star faculty member to the music department in saxophonist Arthur White, who's taken over as director of jazz studies. This Friday, Oct. 18, he'll offer a jazz saxophone recital with his band Merge, featuring vibraphonist Joe Locke and legendary drummer Peter Erskine, in the Pavilion of the Performing Arts Center (7:30 p.m.; all ages; $9 students or $14 general at (805) 756-4849). Expect "Pictures of the Heartland," a nine-movement suite that celebrates the landscapes in Kansas and Missouri.

Remember "Don't Leave Me This Way," Thelma Houston's 1977 No. 1 hit record? It scored the Motown singer a Grammy Award for Best Female R&B Vocal Performance. This Friday, Oct. 18, she'll present Thelma Houston's Motown Experience featuring a tribute to Aretha Franklin in Cal Poly's Performing Arts Center (8 p.m.; all ages; $36 to $66 at calpolyarts.org or (805) 756-4849). It's gonna be phat and sassy!

Get in touch with your inner farmer this Sunday, Oct. 20, when the Fall Harvest Festival takes place at City Farm SLO (located just off Hwy. 101 at 1221 Calle Joaquin, between Los Osos Valley Road and Madonna Road exits; 1 to 5 p.m.; all ages; free). Not only can you listen to the duo of Miss Leo and one of her Bluegrass Boys, Andy O'Brien, you can also go for hayrides and take a farm tour, buy some fresh veggies, pick corn to roast and eat, wander through the pumpkin patch, check out some info booths, play games, buy some delicious grub and beverages, and more! Bring the whole family! Ride your bikes!

"Jake is taking the instrument to a place that I can't see anybody else catching up with him," said fan and Pearl Jam frontman Eddie Vedder. He truly is the world's most amazing ukulele player! Δ