Maybe more than any other genre, country music has to be authentic and real for it to have power. That’s why Josh Abbott is gaining popularity: He delivers real emotion. On “Ghosts” from his newest album Front Row Seats, Abbott’s voice isn’t quite perfect on the final chorus

“I was actually crying my eyes out during that last chorus, and that’s why there’s a couple of notes in the beginning of that section that don’t really explode like normal,” Abbott said in press materials.

He wanted to re-do it, but his producer Dwight Baker, one-half of the Austin-based duo The Wind and The Wave, said nope, “We’re keeping that. That’s real.”

You can see the Josh Abbott Band live and in person this Thursday, March 30, at the Fremont Theater (7 p.m.; all ages; $20 presale at Boo Boo’s or ticketfly.com; or $25 at the door), in a Numbskull and Good Medicine Presents show.

Abbott was divorcing as Front Row Seats was coming together, which is why so many of the album’s songs are emotionally charged. He closes the album with “Anonymity,” a sparsely orchestrated dirge with acoustic guitar and fiddle, a song that fantasizes about wanting to return to the start of a relationship to do it right this time.

“When you’re moving on from somebody, even once you’ve accepted it, you just feel alone,” Abbott observed. “That’s the reason the acoustic track ends the album.

“The whole band embraced this project and really committed to not only make it sound incredible but sound different and better,” Abbott finished. “It’s more mature than anything we’ve done in the past.”

Honesty and authenticity are the two ingredients that make country music real, and Abbott is the real deal.

Numbskull and Good Medicine continues on Friday, March 31, with another Fremont Theater show, this one featuring STRFKR (8 p.m.; all ages; $20 presale at Boo Boo’s and ticketfly.com or $23 at the door), and indie pop/electro act that used to call themselves Starfucker, which probably doesn’t go over great on a marquee!

They’re currently touring North America and Canada with Psychic Twin in support of their latest album, Being No One, Going Nowhere, which was recorded in Joshua Tree.

“It came together for me in the desert. Out there, it’s easy to feel small and slow,” said frontman Joshua Hodges in press materials. Expect some dark, synthy loops!

If you’d prefer some more country instead, Numbskull and Good Medicine host hard-core, rabble-rousing Texas country music star Roger Creager on Friday, March 31, at the SLO Guild Hall (7 p.m.; 21-and-older; $16 presale at Boo Boo’s or ticketfly.com or $20 at he door). If you like Jerry Jeff Walker and Robert Earl Keen, this is the show for you.

“I’ve always tried to make records where every song is different, so I can listen to them over and over again instead of 45 minutes of essentially the same song,” Creager said in press materials, and on his newest, Here It Is, he does just that.

You should also mark your calendars for pop-power-punk act Joyce Manor and opening act Tijuana Panthers, who play a Numbskull and Good Medicine show next Thursday, April 6 (7 p.m.; all ages; $18 at Boo Boo’s or ticketfly.com or $20 at the door), at the Fremont Theater.

Playing for The Rock!

These days it can be hard to find a real radio station, the ones with actual human beings live in a studio, playing records, taking requests, and building community. One such station is The Rock, 97.3 FM, Morro Bay’s community radio station, which is holding its fourth annual fundraising concert this Friday, March 31, at the Morro Bay’s Vets Hall (6 p.m.; all ages; donations encouraged!).

The Rock is Estero Bay’s only volunteer-operated and listener-supported community radio station, and local luminaries Jill Knight with Kenny Lee Lewis (of Steve Miller Band) will play, along with Mama Tumba, and Guy Budd with Inga Swearingen.

“There’s no question that there’s a lot of great musical talent here along the Central Coast,” Hal Abrams the station’s founder said. “At 97.3, we strive to be the voice for all this talent.”

Though admission is free, you can purchase beer, wine, and food from multiple food trucks. There’s also a silent auction, so get out there and raise some money for a great station!

Proceeds will go to the Music Boosters, which is a 501c3 nonprofit organization, meaning your tickets are tax deductible!

“We believe in the power of music to educate and inspire,” Meives said. “We’re very fortunate to have gathered individuals who have played the world’s biggest stage along with major up-and-coming talent that are arriving on the national radar.”

The Red Barn Community Music Series presents Amber Cross in concert this Saturday, April 1 (5 p.m. potluck, 6 p.m. show; all ages; $20 at the door; BYOB), which is welcome news because she’s been taking some time off to have an adorable baby!

She’s also releasing her third album, Savage on the Downhill, which I’m dying to hear since I love her two other albums, You Can Come In and My Kind of Church. She’s got a remarkable old-time mountain voice and writes incredible narrative songs with haunting lyrics.

Gary Arcemont and James Moore accompany Cross on fiddle, mandolin, harmonica, guitar, banjo, and stand-up bass. She’s been compared Nanci Griffith and Iris Dement, but she’s one of a kind. This show is sort of a “soft release” of the album until she has time to really get out on the road.

“After putting so much time and energy into this album, it was a very hard decision to delay the release,” Cross said in press materials. “But with a baby on the way, I had no choice. The national release will come in the following months but I thought I’d share the record with local fans first, since they have been so tremendously patient and supportive.” 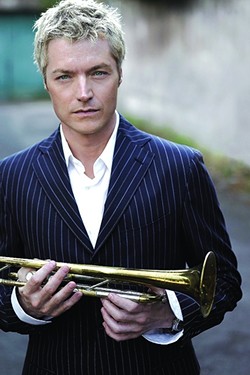 Jazz great Chris Botti, a Grammy winner with a slew of gold and platinum albums who’s performed with everyone from Sting, Barbra Streisand, Tony Bennett, Yo-Yo Ma, Frank Sinatra, Paul Simon, and Andrea Bocelli, plays a Cal Poly Arts concert this Wednesday, April 5 (7:30 p.m.; all ages; $45 to $85, available at 756-4849 or online at calpolyarts.org), in the Performing Arts Center.

Now two decades into his career, Botti is one of the biggest selling instrumental artists in the U.S. with a horn sound called “supple,” “crystalline,” and “poetic.” At the end of last year, he held his 12th annual residency at the famed Blue Note club, having performed 28 nights in a row, two shows a night. That’s a lot of drawing power, even in New York City!

Covenhoven (aka Colorado musician Joel Van Horne) plays the Steynberg Gallery this Saturday, April 1 (8 p.m.; all ages; $15 call 547-0278). “With two critically acclaimed, crowd-funded, and self-released LPs—The Wild And Free (2015) and Covenhoven (2013)—he has established himself as a promising new voice in the folk/indie genre,” according to his bio. “Fans the world over are falling in love with his emotive symphonic-folk sound ... blending powerful poetry with vast, sweeping soundscapes that possess the ability to transport the listener to another place and time.”

Imagery Machine, a female-fronted, San Diego-based rock act with reggae and prog rock undertones, plays the Frog and Peach this Saturday, April 1 (10 p.m.; 21-and-older; free). “The sound is like a mix between Florence + The Machine and The Police,” lead singer Jennie Lynn said. “We’re promoting our new single ‘Higher Tides’ and are very excited to play in San Luis Obispo for the first time.”

A great April Fools’ vocal concert awaits on Sunday, April 2, in the SLO-PAC (3 p.m.; all ages; $10 kids, $20 students, $30 reserved, and $40 premium at 756-4849). The SLO Vocal Arts Ensemble presents favorite pops numbers from their 40-year history. See the return of Gerry Carnahan, of the original Gerry and the Bald Spots!

The Famous Jazz Artist Series returns to Painted Sky on Sunday, April 2, with trumpet great Kye Palmer (6:30 p.m.; all ages; $20 donation requested; reservations at 927-0179). Palmer was a member of the Woody Herman orchestra and replaced Doc Serverinsen as the trumpet man on the Tonight Show.

LA’s Chris Youmans & The Sound Agency plays Frog and Peach this Sunday, April 2 (10 p.m.; 21-and-older; free), bringing a sound that “takes the best elements of classic and modern pop, rock, funk, and soul and weaves them around award-winning singer-songwriter-guitarist Chris Youmans’ truly infectious songs,” according to the band’s bio.

SLO Brew hosts Autumn in June for pint night on Tuesday, April 4 (10 p.m.; 21-and-older; free). The electronica act has pumping tracks such as “Cocaine Eighties,” “I Guess It’s Cool to be Lonely,” and “HEROin KIDZ.”