The Lake Nacimiento water pipeline, which delivers supplemental drinking water to several local communities including the city of San Luis Obispo, has been out of commission since September after leaks were discovered in a segment of the 45-mile pipe that traverses the Salinas River.

Now, SLO County is emptying the project's reserve account to fix the problem. 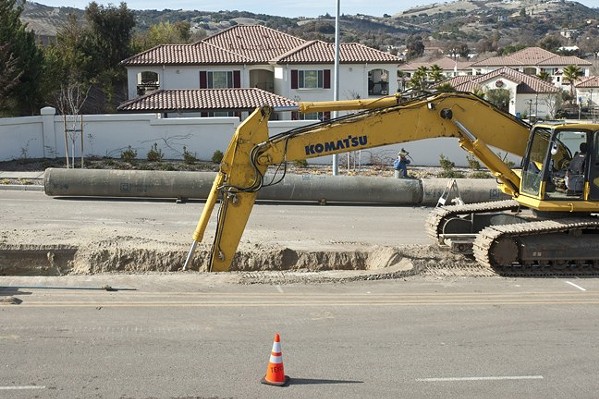 On April 21, the SLO County Board of Supervisors approved a budget adjustment of $4.2 million to pay for the repairs, which will involve installing a "slip line," or a new smaller pipe, on the inside of the existing pipe. The allocation brings the pipe's designated reserve account to $0.

"It's more than fixing a leak," explained John Waddell, SLO County's utilities division manager. "Because it's tunneled under the river, you can't go in and cut out a section. We have to put in a whole new pipeline from one side of the river to the other that's several hundred feet long."

Waddell said the county doesn't know exactly how the 10-year-old pipeline broke, but during the upcoming construction, officials will further investigate the cause and consider pursuing reimbursement from the pipe's original contractor, Teichert Construction.

"Once we have more information, we will be discussing our options and see if we can come to an amicable resolution for reimbursement," SLO County Counsel Rita Neal told New Times.

Video inspection of the pipeline in October 2019 found two leaks that had caused "significant amounts of water" to flow to the surface around the river crossing, according to the county.

"This is considered supplemental water, but it's still important. They definitely want this water," Waddell said.

After the project goes out to bid, construction is expected to start in late summer and last about two months. Δ