County bus fares are going up 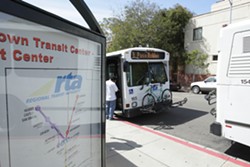 Jorge Jimenez loves to ride the bus instead of driving his car to work in San Luis Obispo from his home in Santa Maria. He pays $4.50 for a day pass. “My car is always kinda iffy,” Jimenez, said. “If something goes out on the car I don’t have the money to fix it.”

Jimenez will soon have to pay more for his trip. The San Luis Obispo Regional Transit Authority is raising fares on August 1 for the second time in two years. These are desperate financial times for the agency: Federal and state public transportation money is drying up or threatened, which could eventually cause the RTA to drastically cut back service. Concurrently, negotiations with employees represented by the Teamsters union are moving at a snail’s pace. Bus drivers, mechanics, and utility workers seek a significant pay raise but transportation officials say there simply is no money available to increase their salaries.

SLORTA operates three main bus routes connecting the northern, southern, and coastal areas of the county, along with transportation for the disabled, and trolley services in Avila and Cambria. With a fleet of 40 buses, it ties the county together, especially for poor and elderly riders, and is a welcome alternative for customers who forswear internal combustion engines.

The RTA’s board has approved a 25-cent increase in the basic fare rate; rates for the elderly and the disabled will rise 15 percent. The basic fare will increase to $1.50 from $1.25. The RTA 31-Day pass will step from $35 to $40. The increases may sound moderate, but they could be a serious burden for many riders. Fares have jumped 50 percent since 2007 and further hikes are likely if the economy does not soon improve.

Unfortunately, the rate hikes will do little to buttress the precarious finances of the RTA. Fares defray only 18 percent of the total costs of  rides. The RTA depends on federal, state, and local support to survive; in recent years, transit officials have relied on a revolving door of state and federal sources to keep the buses running.

The state historically has directed a portion of sales-tax revenue to public transportation agencies and cities but lately has tried to retain the money toward balancing the state budget.

“We had zero funds from the state this current [fiscal] year,” said Ed King, executive director of the RTA. Fortunately, the federal stimulus bill helped fill the gap to fully fund the RTA. But that federal money will soon be spent and it’s unlikely more will be coming. The state has said it would fully fund its traditional obligation to the RTA and will send that money later this year.

“I’m very optimistic,” said King, regarding having enough money to balance the next fiscal year’s $6.9-million budget. He said he is aware though, that what Sacramento gives, it can also take back.

For the first time, said King, the RTA has a contingency plan in case funds fall through: Sunday service would be suspended and weekday service would be cut back by an hour. This would save $291,980, only a small part of the shortfall the RTA would face if any of its funding sources disappear.

What the RTA is going through is happening to nearly every transportation outfit, said Ronald L. De Carli, executive director of the San Luis Obispo Council of Governments, an organization that provides transportation planning and money to public transportation agencies in the county.

If not for the federal stimulus funds,
“[We] would have seen drastic cuts in almost every transit system in the county,” De Carli said.

De Carli said the last three years have been difficult; SLOCOG had to drain into its reserves to make up for shortfalls. Medical and labor costs are on the rise and there seems no end to the bleak financial times.

The RTA has been negotiating with its unionized workers since October of last year. It used to contract out for much of its bus services but brought the entire workforce in house last year. The workers voted to be represented by the Teamsters and have been demanding to be paid the same as city bus drivers and mechanics elsewhere in the state. The workers were given what a transport official calls a “small bump” in pay and benefits when they were hired but nowhere near enough to bring them to parity with comparable positions in other counties. The drivers had received $13 to $14 an hour as employees of the private business contracted by the RTA. Drivers in direct government employ are typically paid $18 an hour.

De Carli said even if the RTA wanted to, there just isn’t any money for increased wages. Any salary increases would have to come from reduced services to the public, he said.