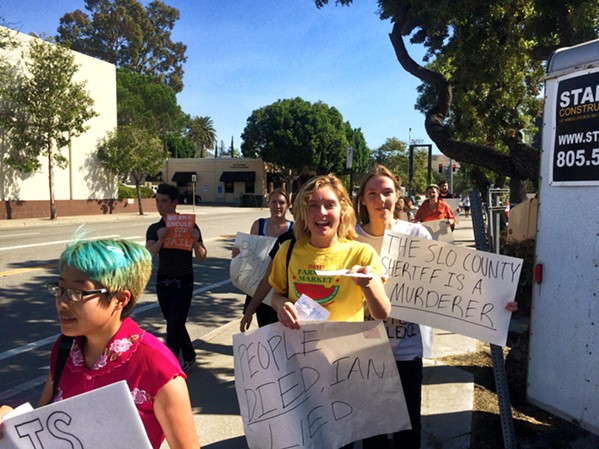 In an Oct. 17 response to a lawsuit filed by McLaughlin's family, a San Francisco-based law firm representing the county and the SLO County Sheriff's Office denied allegations that jail staff ignored signs that McLaughlin was suffering a heart attack and failed to get him proper medical attention despite his request to be taken to a hospital.

McLaughlin died in the jail on April 13, 2017. According to a death investigation report, he complained to jail medical staff that he was having trouble breathing and was experiencing numbness and pain in his arm and shoulder and said he needed to go to a hospital. Instead, he was given Tylenol and sent back to his bed where he died of a heart attack less than one hour later.

McLaughlin's mother and brother filed an administrative claim with the county in October 2017. The county rejected that claim in November of the same year, and the family filed their lawsuit in May of 2018. The lawsuit accuses the county and Sheriff's Office of negligence and violating McLaughlin's constitutional rights.

In its response, attorneys representing the county and Sheriff's Office insisted that McLaughlin was not deprived of his rights or privileges.

"The defendants, at all times, acted in full conformity with all applicable federal and state statutes and regulations, and exercised reasonable care in connection with services provided at the facility," the response, written by attorney Wendy L. Wilcox of the Skane Wilcox law firm, stated.

McLaughlin was the 11th of 13 inmates who've died in the jail since 2012. McLaughlin's death occurred less than three months after the high profile jail death of Andrew Holland, which resulted in the county paying out a $5 million settlement to his family. The deaths also sparked a civil rights investigation by the FBI. An FBI spokesperson said that investigation remains ongoing.

The deaths in the jail became a flashpoint in Sheriff Ian Parkinson's bid for re-election in the June primaries. Despite public protests and an opponent funded by members of the Holland family, Parkinson was re-elected for a third term.

While the acrimony of the election is months in the past, some are still concerned about the jail deaths and Sheriff Parkinson. On Oct. 19, a group of Cal Poly students marched to the SLO Courthouse to protest the deaths and call for Parkinson to resign.

"I think it's still really dangerous for the community of SLO to have him in that position," said Gianna, a member of the group who asked that her last name not used in this story.

In the wake of the deaths, the county and the Sheriff's Office have moved forward with instituting reforms they say will address the public's concerns about jail deaths. Currently, the county is seeking to outsource health services at the jail to a private company.

The McLaughlin family's lawsuit against the county remains ongoing in SLO County Superior Court. James McKiernan, attorney representing the family, did not return for comment for this article.