In its response to the lawsuit, the county argued that deputies Jonathan Calvert and Greg Roach were justified when they shot and killed 34-year-old Josue Gallardo because he posed an immediate threat to their lives and safety. 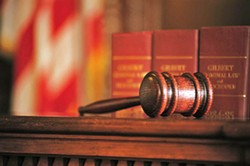 The lawsuit, filed by Gallardo's widow, claimed that Gallardo was cooperating and complying with the directions given to him by the two deputies when they pulled him over on southbound Highway 101 near the Santa Barbara Road exit in Atascadero on Jan. 24, 2017. The suit alleges that the shooting occurred after Roach opened fire on Gallardo, followed by Calvert.

The county response states that Gallardo was not cooperative when deputies asked him to show his hands, and he reportedly told them, "I want you to shoot me. I want you to kill me," as they approached him. Calvert responded that he did not want to kill Gallardo, according to the county. The county also claimed that Gallardo was shot after he drew a gun and began to aim it at one of the deputies. According to the response, Roach, who was on the passenger side of the vehicle, saw Gallardo's hand moving down toward his right pants pocket. Roach then saw Gallardo reach into his pocket and pull out a gun.

"He saw [Gallardo] swing the gun up across his body toward the driver's door, and it appeared [Gallardo] was about to shoot Deputy Calvert," the county's response states.

The county then contends that Roach yelled "gun!" and began firing into the car to protect Calvert's life. Calvert fired on Gallardo after he saw the driver's side door opening and heard Roach firing.

The claim that Gallardo had a gun and aimed it at deputies was featured in multiple press releases issued by the SLO County Sheriff's Office in the wake of the shooting. The SLO County District Attorney's Office later reviewed the incident and determined that the shooting was lawful.

The lawsuit against the county doesn't mention the gun. Questions about the shooting, including whether Gallardo brandished a weapon at the deputies, may be answered by video footage recorded the night of the incident.

Such footage, as well as investigative documents, are now easier for the public to access thanks to a recently enacted state transparency law. California Senate Bill 1421, signed into law last year, went into effect Jan. 1. It requires law enforcement agencies to release internal investigation records, including video, of officer-involved shootings and other use of force incidents, as well as sustained findings of officer-involved sexual assault or lying on the job, under the California Public Records Act.

In response to a public records request from New Times, the Sheriff's Office said it will release video footage of the Gallardo shooting, as well as more than 400 pages of investigative documents associated with the case. The new laws have apparently resulted in an increase in requests for such records.

"Since Jan. 1, 2019, the sheriff has received at least seven separate PRA requests asking for several categories of records related to the types of records now publicly available due to the amendments made by Senate Bill 1421," Sherriff's Office Records Manager Katie Porter wrote in a response to New Times' records request. Δ