The city of San Luis Obispo is looking for partners on a new Community Choice Energy (CCE) program—which turns local governments into renewable energy procurers and electricity sellers—but it won't be able to call SLO County.

County supervisors voted 3-2 on Jan. 23 to abandon any further exploration of forming or joining a CCE. Supervisors John Peschong (1st District), Debbie Arnold (5th District), and Lynn Compton (4th District) voted against continuing CCE talks with either the city of SLO or Monterey Bay Community Power, expressing doubt about the potential for raising customer rates, taking on debt, and getting involved in "government-run" electricity. 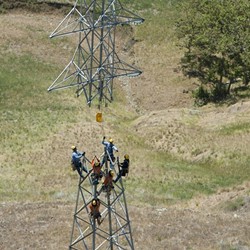 "The conclusion is I'm not convinced that having government-run electricity is really beneficial to my constituents," Supervisor Arnold said.

Nine CCE programs are currently in operation throughout the state, and eight more are in the process of launching. Enabled by state legislation, a CCE allows a local region to make its own choices on energy investments and set customer rates equal to or less than investor-owned utilities like PG&E. Typically, a CCE's goal is to invest in more renewable energy sources than private utilities.

In 2016, SLO County participated in a tri-county CCE feasibility study with Santa Barbara and Ventura counties, which concluded that a regional CCE would be infeasible due to the overlap of PG&E and Southern California Edison territories. Another "pre-feasibility" study stated that forming a CCE within only PG&E territory on the Central Coast may be possible.

In December, the SLO City Council voted unanimously to pursue forming a CCE with interested parties like the county, other local cities, and jurisdictions in Northern Santa Barbara County.

Supervisors Bruce Gibson (2nd District) and Adam Hill (3rd District) both voted in favor of exploring a CCE and expressed "excitement" about the prospects of partnering with the city.

"I respectfully disagree," Peschong said. "I don't see how going forward right now will not cost the ratepayers more money."

Gibson countered that the board didn't have adequate information yet to draw that conclusion and questioned why the supervisors would reject further efforts to gather data.

"What strikes me is the board majority seems intent on refusing to have our staff get more information," Gibson said. "We're turning our backs to our city colleagues. It all comes down to an ideological opposition to 'government-run' electricity." Δ