The long-desired missing link of the Bob Jones Trail to connect San Luis Obispo with Avila Beach is one small step closer to the finish line.

SLO County supervisors unanimously approved a $1 million contract with the Wallace Group on July 10 to deliver engineering, design, and environmental services for the 4.4-mile bike and pedestrian path, which would start at the Octagon Barn near SLO and merge with the existing trail on Ontario Road. Securing the funds to move the trail project forward has proven difficult over the years, but through a mix of grants and parks funding, the county was finally able to pool the resources needed for the design phase. 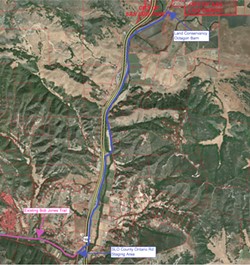 The supervisors' decision received resounding support from one future user of the trail.

Design work on the trail is expected to take roughly a year, according to the county. It includes mapping three bridges over San Luis Creek, a Highway 101 undercrossing, and obtaining approval from property owners along the path.

"We have a few hurdles for where we're going to place the trail," Public Works Director Colt Esenwein said.

Esenwein said the county is applying for state transportation grants to help offset the estimated $10 million in construction costs. The Bob Jones Trail was given top priority by the county out of six bike trail projects ranked for grant funding.