An independent assessment of medical and mental care at the SLO County Jail remains unavailable to the public and county supervisors despite being a factor in the county's possible decision to spend millions of taxpayer dollars to outsource such services in the near future. 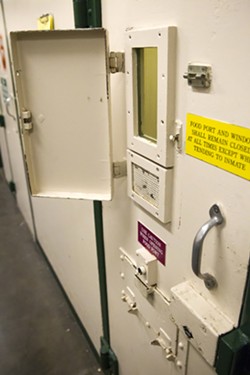 The assessment, conducted by San Diego County Sheriff's Department Chief Medical Officer Dr. Alfred Joshua, has already been used to implement some reforms at the jail and is, in part, the basis for the county's move to consider outsourcing medical and mental health services at the jail. But none of the county supervisors have been provided with the full assessment, and the county's legal counsel has declined to release it to the public, stating that it is also connected to pending legal claims against the county.

According to a February report from county staff, Joshua was hired as a consultant as part of a wide-ranging review of the mental and medical health services at the jail that included internal investigations by SLO County Sheriff's Office, the county Health Agency, as well as an investigation by the FBI. According to the report, Joshua brought in a team of experts in nursing, administration, medical, mental health, and sworn leadership to conduct the independent review.

According to the staff's report, Joshua's evaluation, as well as a report by the SLO County grand jury, identified an absence of oversight for inmate health care by the Sheriff's Office. Based on those findings, the Sheriff's Office recommended that the county explore contracting medical and mental health services to an outside vendor and hire a chief medical officer for the jail. The county approved the creation and hiring of a chief medical officer for the jail and directed staff to develop a request for proposals (RFP) for outsourcing jail health care services. The county began accepting bids on that RFP in March. At a May 15 meeting, County Chief Administrative Officer Wade Horton said he expected to bring back a recommendation to the board for possible adoption in late August. In a draft of the fiscal year 2018-19 budget, the county stated that it included an additional $2.3 million for the possible outsourcing of medical and mental health services at the jail.

"Before we talk about outsourcing, we need to understand exactly what system we need to have in place," 2nd District Supervisor Bruce Gibson said at the May 15 meeting.

First District Supervisor John Peschong told New Times that he hadn't received Joshua's report, but had read a summary. Fifth District Supervisor Debbie Arnold said she'd been briefed on a summary of the report. Third District Supervisor Adam Hill said he had not seen or read the report. At the May 15 meeting, both Hill and Gibson asked for the assessment to be made public and for the board to review the full report before voting on whether to allocate money to outsource those jail services.

"We need to be able to explain, and have the public understand as well, the decision that we are going to make on how we spend funds to address this issue," Hill said.

County Counsel Rita Neal said that she did not have the authority to make Joshua's report public, stating that it was and continues to be part of pending legal claims against the county.

"I think the difficulty that I find myself in, in this office and perhaps the board, is there's that balance between transparency and improving our system ... and the best way to go about looking out for the county's best interests when it comes to litigation," Neal said.

According to a recent report by New Times, 25 percent of the medical malpractice claims filed against SLO County in the last 20 years were related to the jail. Those include a wrongful death claim filed by the family of Andrew Holland, which the county settled for $5 million last year, and a claim made by the family of Kevin Lee McLaughlin, an inmate who died of a heart attack in the jail in April 2017. The county rejected McLaughlin's claim, and the family filed a civil lawsuit against the county in May. The family of Russell Alan Hammer, another inmate who died in custody in November 2017, filed a claim with the county in April, alleging that his death was the result of "horrible and inhumane" treatment.

In February, the county denied a public records request from New Times for Joshua's report on the jail, stating that it was protected from public disclosure because it was prepared at the direction of county counsel as "a critical tool to assist county counsel, the sheriff, and the director of the Health Agency to formulate policy and assist in the departments' decision-making process" and thus, confidential.

Gibson said he hoped that Joshua's report would eventually become public in the not-too-distant future, stating at the meeting that there needed to be a "very honest, open-eyed look at what we need to be doing in our jail."

"I do believe it will become public," Gibson later told New Times. "But we do have to have a conversation within the board about how it relates to litigation." Δ