SLO County recently launched a project aimed at developing a groundwater sustainability plan for the Arroyo Grande Subbasin and is calling for community members with wells that tap into the basin to help improve the county's water level data. 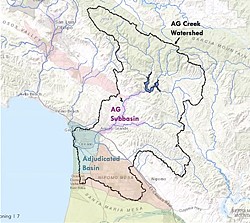 Although the state considers the Arroyo Grande Subbasin to be very low priority and it is not required to have a sustainability plan, SLO County Water Resources Division Manager Courtney Howard said that's largely because it serves a smaller population than others throughout California.

"But for us locally that's an important basin," Howard said. "There's a lot of agriculture there."

The Arroyo Grande Subbasin consists of a 7-mile stretch extending from the Lopez Dam to Highway 101 and was established as its own entity in 2019, when the California Department of Water Resources granted a request to separate Arroyo Grande from the rest of the Santa Maria River Valley Basin.

SLO County Water Resources Engineer Dick Tzou said the basin was conisidered a high priority when it was part of the larger Santa Maria River Valley Basin. All medium- and high-priority basins in the state are subject to the Sustainable Groundwater Management Act, which requires communities with such basins to create groundwater sustainability plans that allow for continued monitoring and improving of groundwater conditions.

"So because of that requirement, we applied for a grant to do this plan," Tzou told New Times.

Still, Tzou said the county hopes to use the grant money to create a plan that will keep the subbasin in good shape for years to come. County staff say the development of the groundwater sustainability plan will provide information necessary to develop the Arroyo Grande Creek Habitat Conservation Plan, which the SLO County Flood Control and Water Conservation District is currently working on.

The county hosted its first public workshop for the subbasin on Dec. 15, where community members discussed their goals and visions for the basin with the project team.

Throughout the workshop, team members highlighted the need for improved well data in the Arroyo Grande area. One important measure of sustainability is declining water levels, Tzou said. If water levels in the wells that tap into a basin are chronically declining over several years, that's a big sign that something needs to change.

While Tzou said the county does have permission from some Arroyo Grande area folks to monitor their wells, some data gaps still need to be filled.

"Without monitoring," he said, "you don't know what the conditions are in the ground."

At the Dec. 15 workshop, GSI Water Solutions Hydrogeologist Dave O'Rourke called for the community's help in this arena.

"This is my time to make my pitch to anybody in the listening audience who may have a well that would enhance this monitoring network," O'Rourke said at the meeting. "This is by no means the last time you will hear this request." Δ