When the news broke last week about a shooting that led to the death of one San Luis Obispo Police Department detective and injured another, community members and law enforcement officers throughout the county were devastated.

"It's one of those things where we look at our jobs and we think, 'That could have been me,'" Grover Beach Police Cmdr. Bryan Millard said. 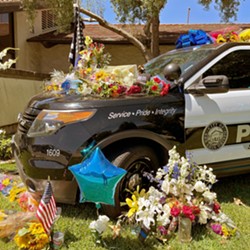 Grover Beach police and other allied agencies wanted to do whatever they could to help San Luis Obispo police mourn the death of their fellow officer and friend. Using mutual aid agreements that allow agencies across the county to work outside of their jurisdictions—the same agreements that were used to increase staffing levels during SLO's protests of police brutality in 2020—county departments worked together to cover for SLOPD in the wake of the shooting, keeping 24-hour watch of the body and taking calls for service in the city.

On May 10, six SLO police officers served a search warrant at Edward "Eddie" Zamora Giron II's apartment on Camellia Court in SLO, as part of an investigation into a series of recent commercial burglaries.

When officers forced open Giron's door at around 5 p.m., officials said he "was lying in wait" inside with a gun and opened fire. During the exchange, Giron shot and killed SLO Police Detective Luca Benedetti, 37, and injured Detective Steve Orozco before turning the gun on himself.

It's tradition for law enforcement personnel to stay with the body of a fallen officer 24/7 until he's laid to rest, and Millard said several Grover Beach officers worked overtime and, in some cases, over night to stand watch outside Benedetti's funeral home. The memorial service is scheduled to start at the SLO Performing Arts Center on the Cal Poly campus at 10 a.m. on May 20.

In a small department like SLO's, Millard said everyone knows everyone, and coworkers quickly become like family. That closeness is part of what makes the work here worthwhile, he said, but it also makes it all the more heartbreaking when tragedy strikes. Thanks to increased coverage in SLO from the SLO County Sheriff's Office and other agencies, SLO police officers were able to take some time off immediately after the shooting

"It's important because we want officers to be at their best and be focused on their jobs," Millard said, "and they need time to deal with the loss."

At a press conference the day after the shooting, then acting SLO Police Chief Brian Amaroso described Benedetti, a 12-year veteran of local law enforcement, as "a dedicated officer, a talented detective, a proud member of the SLO Regional Swat Team, and most importantly, a loving husband and father."

Orozco, who was shot multiple times, is expected to make a full recovery.

Amaroso also thanked law enforcement agencies throughout the county for their support. Not only is the SLO County Sheriff's Office conducting an investigation into the shooting in partnership with the SLO County District Attorney's Office, it increased staffing levels and handled calls for service in the city immediately after the incident.

"The San Luis Obispo Sheriff's Office, along with allied law enforcement agencies throughout the county, will be responding to calls for service in the city during the coming days so that members of the San Luis Obispo Police Department can grieve and work through this tragedy," Amaroso said at the press conference.

"An unspeakable tragedy had just occurred," Cipolla wrote in an email to New Times. "We were able to provide assistance in their time of need, which allowed officers the time to grieve. It was simply the right thing to do." Δ