December 07, 2017
comment
After dropping out of a countywide agreement to build a new animal shelter due to its price tag, the cities of Paso Robles and Atascadero are back in talks with the county to try to revive the $13.7 million project on Oklahoma Road. 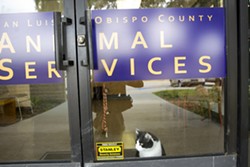 Arnold reported to the Board of Supervisors on Dec. 5 that there’s a chance the cities could get back on board with the countywide shelter.

“The discussion revolved around how we can basically change our business model to better serve the needs of the cities at an affordable cost to them,” Arnold said.

Extending the length of the financing agreement to reduce annual costs to the cities and launching an educational campaign in North County on feral cats to reduce the need for services at the shelter (i.e., local trap-and-release spay/neuter programs) were the two solutions that Arnold suggested.


The parties will continue to meet until early March to negotiate with the cities, according to the county.

Lee said “minor project management and consultant costs will continue to be incurred” as the Paso, Atascadero, and SLO County continue their discussions. Lee added that the range of possible solutions included a redesign of the shelter.


Costs for the shelter will be shared among all seven cities in SLO County, with Paso and Atascadero paying the largest share as the cities with the highest demand for animal services in the county. ∆