The funds—made available to SLO County through state grants—will help pave the way for the 5Cities Homeless Coalition and Peoples' Self-Help Housing to acquire property on Newport Avenue, which they hope to develop into 19 low-income apartments, transitional housing for homeless youth, and other services and uses, such as offices. 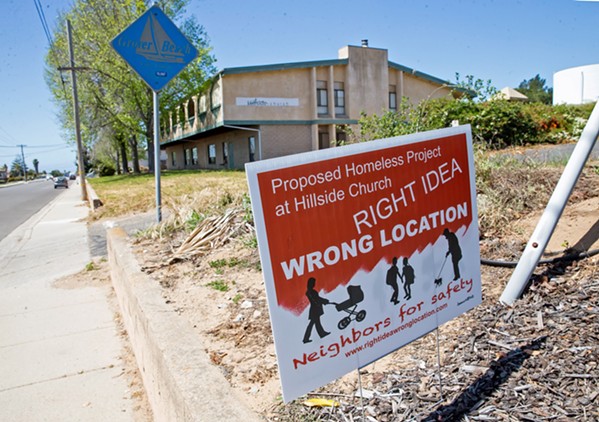 5Cities Homeless Coalition is in escrow to purchase the property, which currently houses Hillside Church in a residential zone. The project faces intense opposition from nearby residents. Nearly 500 residents signed a petition submitted to the county titled, "Don't allow homeless facilities in a residential neighborhood."

Dozens attended the April 23 meeting to ask that the supervisors not send funds to the project, citing safety and traffic concerns with its location in a neighborhood close to schools.

"Young children don't have the capacity to deal with the type of people who will be in this facility," another speaker said. "Children will no longer be able to [walk to school]."

After hours of public comment, the supervisors voted 3-2 to approve the funding allocation. Supervisors Lynn Compton (4th District) and Debbie Arnold (5th District) dissented, citing issues with the location and the local opposition.

Compton said neighbors had "legitimate concerns about people wandering the streets" and that services for the homeless shouldn't come "at the expense of the other people."

"We want to try to minimize conflicts when we can," Compton said. "My problem with this is [it's] in a residential area."

Arnold added, "I can't get behind a project with this extreme opposition," and pointed to other organizations that had applied for the funds but weren't in line to receive them—like the Salvation Army, which proposed acquiring supportive housing units "scattered" around the county.

While Compton and Arnold discussed conditioning the funds for 5Cities Homeless Coalition on its reaching a resolution with the neighborhood, Supervisor John Peschong (1st District) broke the 2-2 deadlock with his support for the allocation.

"I don't want to put any strings attached on the money," Peschong said, adding, "I don't believe they're going to allow people to roam the streets."

Peschong noted that the Grover Beach City Council will be the body to ultimately make the decision on the project.

"There are a number of people in this room who want us to take over land use," he said. "That's up to the City Council. There's a way forward here that's only going to come from the community."

Nichols of the 5Cities Homeless Coalition told New Times they'll be honing the details of their proposal in the coming weeks before submitting an application with the city of Grover Beach.

"We're looking at the project plan," she said. "We're continuing to look at what project we can put forward that will try to satisfy the needs of the homeless and at the same time respect some of the concerns expressed by the neighborhood."

In addition to the $2.7 million sent to the Grover Beach project, the Board of Supervisors also allocated $1.5 million for a new homeless warming and services center in Paso Robles, as well as $400,000 to CAPSLO to help build a detox facility at 40 Prado in SLO. Δ