On Oct. 26, San Luis Obispo County held its first redistricting hearing since the U.S. Census Bureau released 2020 data. So far, members of the Board of Supervisors' conservative majority are keeping their opinions about maps close to the vest. Come Nov. 30, they'll vote on one. 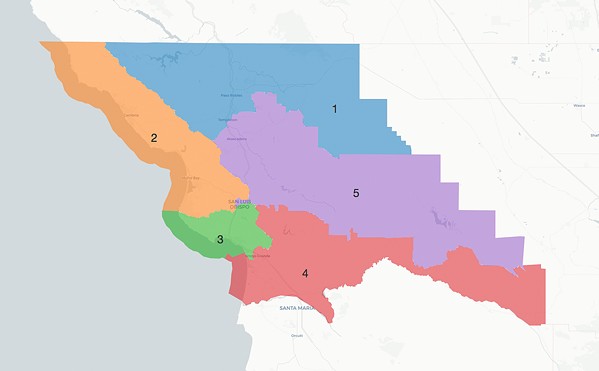 Ahead of the meeting, local residents, stakeholder groups, and the county's contracted consultant, Redistricting Partners, submitted draft electoral maps for the board to consider. The county plans to hold two more redistricting meetings on Nov. 19 and Nov. 30 to take input.

"I think there are number of creative people in this community who have looked at these maps. I think that's great," Peschong said.

Some of the submitted maps kept the current five supervisorial district boundaries largely the same. Others made major changes, like splitting up the North Coast into multiple districts (they're currently all in District 2), giving the city of SLO just one supervisor instead of three, and removing Oceano from the 4th District in South County.

Chris Chaffee, of Redistricting Partners, explained to the board that it legally does not have to alter its current supervisorial boundaries much. The county only added about 10,000 people to its population since 2010, with District 4 seeing the largest population increase of 9.2 percent, and District 2 seeing a population decrease of 8.6 percent.

Overall, the percent deviation between the districts' populations is not high enough to demand major changes, Chaffee said. Plan A, one of four proposed by Chaffee, keeps the current boundaries mostly intact.

"The current lines do not need to be changed, short of minor changes," Gibson said. "I think it's important to lay down the marker that we don't have to do anything."

Plan B proposed by Chaffee puts all of Cal Poly into District 2, instead of in two districts. Plan C removes both Cal Poly and the city of SLO from District 5, which is otherwise above the Cuesta Grade in North County. But that plan also moves Cambria from District 2 to District 1, a change that many Cambrians opposed. Plan D tries to align the supervisorial boundaries with school district lines.

The map that received the most commentary on Oct. 26, though, was one submitted by local resident Richard Patten. Patten's map put all of SLO city and Cal Poly into District 2, moving Cayucos, Cambria, and San Simeon into District 1, and Los Osos into District 3.

"I think it's time for a change," Patten said during public comment.

Some residents agreed with Patten that SLO should get just one supervisor.

Others argued that as the largest city in the county and economic center, SLO is appropriately divided into different districts. Third District Supervisor Dawn Ortiz-Legg held that view.

"I don't think you really want to have just one supervisor holding the city of SLO," Ortiz-Legg said. "[SLO] has different voices and influences ... it has a diversity to it."

As the county continues accepting proposed maps leading up to its Nov. 30 decision, which will get finalized via ordinance in December, Ortiz-Legg reminded her colleagues and the public about what's at stake.

"I think this map-playing game is not a game. This is something that's very serious about representation," she said. Δ