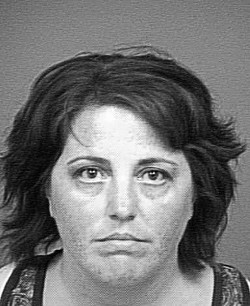 A San Luis Obispo County Mental Health Services employee who was convicted in July of forging a county prescription slip to illegally obtain Vicodin is back at work.

Kathy Peters, 39, a medical records technician supervisor with Mental Health Services, returned to work on Aug. 16 without a demotion or reduction in pay. In fact, Peters was placed on paid administrative leave following her arrest. According to county Human Resources Personnel Analyst Ken Tasseff, she collected approximately $8,750 over the two months she was away from work.

Peters was originally charged with forging and issuing a narcotic prescription and attempting to obtain a controlled substance by fraud, both of which are felonies. Prosecutors agreed to drop the second charge and reduce the first to a misdemeanor in return for a guilty plea. Her sentence was deferred pending completion of a drug education program, which she has until
July 2013 to complete.

Peters retained her title as supervisor, a position that doesn’t include access to physician prescription pads, Tasseff said.

This story began at roughly 6 p.m. on June 10, when police responded to a call from a pharmacist at a Rite Aid in Atascadero, who reported a suspicious prescription, according to the police report.

Police arrested Kelly Aggson, 41—Peters’ sister—at the scene. Aggson was later charged with attempting to obtain the pharmaceuticals with the forged doctor’s note, also a felony. Prosecutors reduced the charge to a misdemeanor after Aggson pleaded no contest.

Aggson told New Times her sister forged the prescription under Aggson’s name, but listed her own number as contact. Aggson said she was called by the pharmacy to pick up the prescription and when she arrived was taken into custody. Aggson—who said she regularly picks up her prescriptions at the same location and is known by the pharmacists—said she didn’t get a chance to look at the Vicodin before she was arrested.

Once police obtained the prescription slip, they contacted Peters, who turned herself in. According to the police report, Peters told officers Aggson wasn’t involved.

Aggson pleaded no contest at the advice of her attorney, Ilan Funke-Bilu, to avoid a lengthy trial and considerable legal fees, she said. She added that she is preparing a small claims complaint against her sister. ∆