San Luis Obispo County supervisors will hear from county Clerk-Recorder Tommy Gong on Feb. 26 about the pros and cons of implementing a new election model in 2020 geared toward mail-in voting. 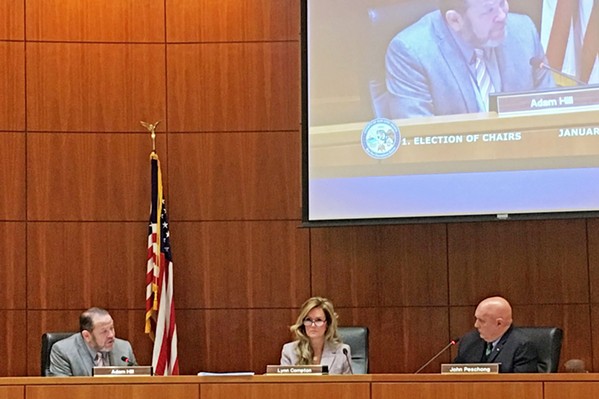 "It seems as if you've already come up with a dismissal of it without looking at how potentially you might be able to do this," Hill said to Gong at a Feb. 5 meeting, where the supervisors voted to agendize the Feb. 26 discussion.

Gong told New Times that he is leaning against deploying the optional model introduced in California in 2018 via Senate Bill 450. The model—used by five counties in 2018—restructures elections around mail-in voting. Every registered voter would receive a ballot in the mail, and instead of the county opening the standard 78 polls on Election Day, it would staff and operate 20 "vote centers" required to stay open for 10 days before and through Election Day.

"It's like having an Election Day every day for 10 days before," Gong said.

Gong's key concerns are that the model would be too expensive (mainly due to the staffing/infrastructure requirements at the vote centers), logistically challenging, and could risk squelching the SLO County vote in a highly anticipated 2020 presidential election.

"The larger the election is, the more voters are going to turn out at the polls," Gong said. "You look at presidential elections, we always have a stronger turnout of poll voters."

Educating the public on a brand new election system, he said, "isn't impossible, but is it the most prudent thing to do?"

In 2018, SLO County was on a short list of 14 counties eligible to pilot the new model. Gong's office studied the feasibility of that for eight months and decided against it for similar reasons to why he's not in favor of it for 2020. Gong said the five counties that followed through with it reported financial costs that made him "a little shocked, actually." He declined to share what those costs were.

The pilot counties—Sacramento, San Mateo, Napa, Nevada, and Madera—did see higher voter turnout in November 2018, Gong said, but so did counties across the state, including SLO at 74 percent. The majority of SLO County voters already choose to cast their ballots by mail.

"Why jump through all the hoops required for vote centers when we're doing just fine with vote-by-mail?" Gong said.

Gong's approach isn't sitting well with Supervisors Hill and Gibson, who both made the push on Feb. 5 to agendize a public discussion about the issue.

"We're going to have the conversation and hear what it's going to take, and we're going to see what the options are," Gibson told New Times. "We just never got briefed on what the possibilities were. He [Gong] owes the public that discussion."

The supervisors nearly didn't agree to have that conversation. As Hill was questioning Gong on Feb. 5, 5th District Supervisor and board chair Debbie Arnold interrupted, stating the unagendized back-and-forth was nearing a Brown Act violation.

A tense exchange ensued, and after Hill told Arnold, "This is not a Tea Party meeting," she briefly cut off his microphone. Gibson then made a motion to agendize a future discussion, but it failed to pass, with Arnold, 4th District Supervisor Lynn Compton, and 1st District John Peschong voting "no."

Following a five-minute break, Peschong introduced an identical motion and it passed 5-0.

"The jury's still out," Gong said. "When I go to the board that's where I'm going to lay it all out on the table." Δ