County supes race is heating up

Jerry Lenthall is likely to face a fight in District 3 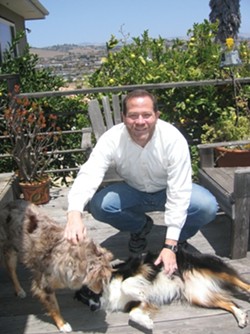 # Adam Hill's Grover Beach home is literally buzzing, with a colony of bees having recently taken up residence in the wall near his front door. It's an echo of the buzz that the Cal Poly English teacher is working to create around SLO County regarding his plans to run for county supervisor against Jerry Lenthall.

"It isn't out of a burning desire to be a county supervisor. It's the changes that are happening here. We're going in the wrong direction, creating more sprawl, with big houses on big lots eating up the countryside," Hill explained in an interview.

When Hill formally makes his announcement, expected on June 20, he'll be entering the race a year ahead of the primary contest and about 17 months ahead of the 2008 November general election. It's a sign of the sort of organization and preparation that it takes to run for local supervisors races, which now routinely run into the hundreds of thousands of dollars in spending and see the hiring of experienced political professionals.

A SLO County resident for a dozen years, Hill has become a familiar face at local political meetings where he closely follows decisionmaking, especially on land-use and social issues.

"I really think Jerry Lenthall has done a poor job of representing the district. He's a nice guy, he's involved in good volunteer causes, but I have profound disagreements with the decisions he makes as supervisor," says Hill.

For his part, Lenthall says he's not worried. "I do my job on my own merit. I don't respond to hypotheticals. It's premature and inappropriate to respond. No one has filed candidacy papers."

Hill's first thought was to work on someone else's campaign for the District Three seat, but he said everyone he talked to was scared off by Lenthall's record-setting campaign spending in 2004, when he won by 425 votes just under two percentage points against Patty Andreen (who is now living out of the county).

"I had to either stick my head in the sand, or stand up. I didn't want fear of Lenthall's contributions and connections to the wealthy and powerful to stop me, or it would eat at me.

"I believe public service is a noble thing serving your community is a duty," he adds. Hill and his wife, Ginny Bayly-Hill, have been involved with social justice and poverty issues in the county she's on the board of Habitat for Humanity locally, and he's served as president of the Food Bank Coalition of SLO County and is a member of the steering committee of the SLO County Housing Trust Fund.

Hill, 41, has first-hand knowledge of the political process. The New Jersey native has a bachelor's degree in government, and worked in the early 90s in Washington D.C. as a staffer for former New Jersey senator Bill Bradley. Eventually, though, his love of literature led to a master's degree in English and another in writing, and then, in 1995, to a teaching job in Cal Poly's English Department and a stint as a book reviewer for the L.A. Times and the S.F. Chronicle.

These days, a stack of novels and New Yorker magazines sits unread in his living room, while Hill's attention is taken up with a thick book on water resources, another titled The High Cost of Free Parking, and a land-use planning book called Visualizing Density.

An expansive view from the deck of the couple's South County home stretches over much of District Three, from Grover Beach to Avila. The district also includes nearly half of San Luis Obispo, south of Marsh Street.

Sipping coffee from a colorful cup from a public radio station, and occasionally petting his two Australian shepherds, Alice and Nora, Hill explains his philosophy. He's an advocate of "smart growth," where a range of housing is directed to existing communities to make more efficient use of existing infrastructure rather than paving over agricultural land.

"I'm a centrist, I'm practical, I'm reasonably pro-business, and I'm not against growth but there's bad growth and there's good growth," he says. "We're really at the point where we have to make a choice. How do we grow without wrecking this place? How many of these 'McMansions' do we need? Decisions are being made by a three-vote majority on the Board of Supervisors for special interests and sprawl, against the general plan and against the staff recommendations. And Lenthall never tells us why he votes the way he does. He doesn't explain his decision-making."

Hill, who calls himself "a low-key, friendly person," says it's important to have a vision for the future his vision includes well-planned communities, workforce housing, and a detox facility for meth addicts, among other things.

His expected candidacy has won the endorsement of two previous District Three supervisors Evelyn Delaney and Peg Pinard as well as various local mayors and city councilmembers, he says. Hill plans to ask Lenthall to participate in twelve debates throughout the district.

"He can't run the same feel-good campaign as last time. Now he's got a record. I'll remain personally respectful, but I've told him I'm going after his record."

Hill and other county supervisor candidates will have the next year to campaign, until the June 2008 election.

He concludes, "This race will be a crucial one for the county."