After agreeing to pay out millions of dollars to the family of a mentally ill man who died in jail earlier this year, SLO County is gearing up for an independent review of the jail and its protocols. 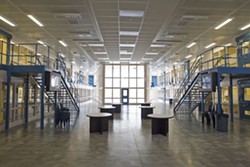 Speaking to New Times, SLO County Assistant Administrative Officer Guy Savage said the county had not finalized the details and scope of the independent review beyond that it would be a general review of the jail's procedures. The full scope of the review and further details are expected to be brought before the county Board of Supervisors for approval at a future board meeting.

In July, the county announced a $5-million settlement with the family of Andrew Chaylon Holland, a 36-year-old schizophrenic man who died Jan. 22 of an embolism shortly after spending 46 hours in a restraint chair at the jail. As part of the settlement, the county and the SLO Sheriff's Office agreed to implement a number of changes at the jail and the county's behavioral health department. Holland is one of 11 inmates who've died in the jail since 2012.

Currently, the FBI is conducting its own investigation and trying to determine if any of the deaths constituted a violation of inmates' civil rights. Savage said the county wanted to make sure its own independent review did not hamper or interfere with the FBI's investigation, which began in May.

"There's an ongoing FBI investigation, and we don't want to be seen influencing that one way or the other," Savage said.

While the county hammers out the details of its independent review, its supervisors will hold their own discussion about the jail at their Aug. 22 meeting. The item was placed on the agenda after 3rd District Supervisor Adam Hill called for a discussion about jail protocols and policies. Hill noted the public outcry that followed Holland's death and the announcement of the settlement, indicating that the county owed the public a transparent accounting of what happened.

"We may have met our liability monetarily and legally, but we have not met the moral liability of being able to have this explained in a transparent manner," Hill said. "The public is due a vetting of what happened."

The discussion will also include the topic of potentially contracting or outsourcing medical services at the jail. Fifth District Supervisor Debbie Arnold called for agendizing the item at a prior meeting in response to a recent SLO County grand jury report on inmate health and safety. Arnold was the lone vote against placing Hill's jail discussion item on the Aug. 22 agenda.

Arnold indicated she wants to move forward with making changes instead of going through a review.

"I was as upset as anybody. My approach was to say, 'You know what? Something's wrong and we need to change it up to provide medical service so something doesn't happen again,'" Arnold told New Times. "We've been fooling around with these problems for a while now. I want to know right now what is available out there and what does it cost."

Savage said that the Aug. 22 presentation would be "forward looking."

"We're going to be focused on looking at where we're headed," he said. "We know what went wrong and where things could've been done differently."