Exactly how San Luis Obispo County will go about replacing its outgoing elected clerk-recorder will be a topic of public discussion on July 14.

The SLO County Board of Supervisors directed its staff at a June 22 meeting to come back next month with options for appointing an interim clerk-recorder. 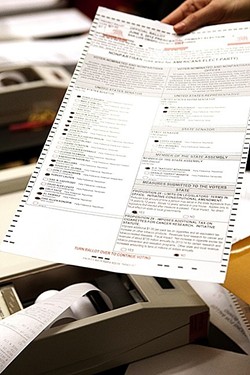 Current Clerk-Recorder Tommy Gong is leaving his post on July 2 after accepting a job as a deputy clerk in Contra Costa County. His exit comes after a wave of unfounded criticism against his elections office from the Republican Party, and ahead of a governor recall election, redistricting, and two 2022 elections.

In his absence, current Deputy Clerk Helen Nolan will serve as acting clerk-recorder. But since clerk-recorder is an elected position, the Board of Supervisors must appoint an interim replacement in a "reasonable" amount of time, with the job up for election in 2022.

Arnold suggested that on July 14 the board could "immediately open an application process to citizens interested" in the interim job. Second District Supervisor Bruce Gibson cautioned against that approach and said he'd rather give early consideration to Nolan.

"My concern is that opening this process up stands to make it into a political circus," Gibson said. "This board needs to be very careful about how we proceed into the future. This office has a tremendous amount of work to do."

"I really, really do not want anyone to accuse us of not having a transparent process," Peschong said.

Julie Rodewald, a former SLO County clerk-recorder, spoke on behalf of the League of Women Voters to advocate for a nonpartisan replacement who has professional experience. Δ