After hearing backlash from landowners, on Aug. 18 the SLO County Board of Supervisors scrapped a plan to revise the boundaries of the Paso Robles Groundwater Basin so that the county's boundary matched the state's.

While the revision would've aligned the basin maps as stakeholders start to implement a 20-year sustainability plan mandated by state law, it would've also drawn more than 500 new property owners into its boundaries, subjecting them to an irrigation moratorium and other county water conservation policies. 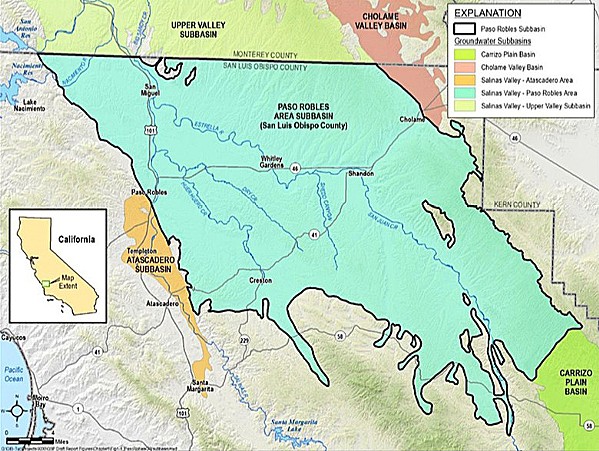 "Those [two boundaries] should be completely separate," 5th District Supervisor Debbie Arnold said at the Aug. 18 meeting. "We would be imposing all of those regulations and restrictions that have caused a lot of trouble, and really resulted in a very unfair distribution of the water in the Paso basin. We'd just be adding more property into that."

The county's basin map is its foundation for a 2013 groundwater "offset" ordinance, which restricts pumping from the depleted aquifer. Landowners set to be affected by the map redrawing objected to the change, arguing it lacked a scientific justification.

For the same reason, the board also decided not to move the basin's "area of severe decline." That area—called the "red zone"—comes with even more severe pumping restrictions, and those boundaries have impacted some overlying farmers who claim their water levels are not in severe decline.

Supervisors expressed a desire to give those landowners a path out of the red zone and directed staff to come back with a process where they could petition for their removal. That will come back to the board in November for review.

The offset ordinance is set to expire in 2022, and the polices developed as part of the Paso basin sustainability plan are expected to take its place. Δ