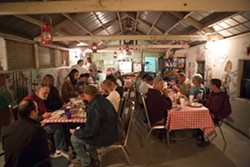 Having no housing isn’t necessarily worse than having any housing, according to San Luis Obispo Superior Court Judge Charles S. Crandall’s ruling that will force residents of the Sunny Acres sober living facility back onto the streets.

“It’s an oversimplification to say that any housing is better than no housing,” Crandall wrote in his opinion released on July 2.

In his ruling, Crandall effectively waved through a SLO County request to vacate most of the living structures at the Sunny Acres ranch, essentially capping approximately 10 years of battles between the county and ranch owner Dan DeVaul.

County attorneys Terence Cassidy and Nina Negranti made a request for injunctive relief, basically a court-mandated compliance order on DeVaul. After a two days of arguments on June 17 and 18 between the county and Sunny Acres attorney John Belsher, Crandall approved the injunctive relief request almost verbatim. Under that ruling, DeVaul must vacate all the tents, cabins (county officials refer to such structures as sheds), and RVs in which most Sunny Acres residents currently live. He must do so by Aug. 23.

According to DeVaul, about 16 to 24 Sunny Acres residents face eviction under the order. However, he told New Times he may be able to accommodate more people in the farm house. Seven people, though, will likely be forced off the property in compliance with the order.

Crandall’s order didn’t include a stipulation in the original request that DeVaul would pay each resident $1,500 to relocate, but mandates that DeVaul won’t collect the $300 monthly rent from residents in the condemned structures. The order further requires DeVaul to either convert the stucco and dairy barns to “ag-exempt” standards or demolish them by Oct. 1. DeVaul said no one has lived in either of the barns since the county first labeled them uninhabitable last year.

The order also requires DeVaul to find an alternative source of water due to county tests that showed the presence of coliform bacteria and E. coli (DeVaul disputes such results and said the county has been unwilling to accept his own tests that show the water is clean). DeVaul is further required to address hazardous waste materials on the ranch, charges he also disputes.

DeVaul met with New Times editorial staff shortly after the ruling was announced. Having come directly from the ranch, his black jeans and blue denim shirt were still caked with dust. He spoke slowly and deliberately, cursing more than he has in past interviews.

“I don’t have any fucking idea what they’re pushing for,” DeVaul said of the county. “I can conjecture that they’re trying to put us out of business.”

DeVaul has plans for an 8,000-square-foot, 14-bed housing facility that would replace the vacated sheds and tents, but has so far been unsuccessful in obtaining a building permit. He’s also had no luck acquiring a permit fee waiver for the new housing facility (he said the fees for such a permit would be at least $13,000).

“I don’t want an end run,” DeVaul said. “But on the other hand, I don’t want to be excluded and have every dirty trick and every roadblock thrown in my way just to trip me up.” ∆