At first, they spoke of drug addiction, of crippling alcohol dependency, of paranoid delusions, of bipolar mood swings, of sexual assault. They were fighting back tears and grimacing through their words.

As they continued to speak, however, their faces brightened, their voices grew stronger. They even smiled. Their family, friends, and supporters in the audience clapped enthusiastically. 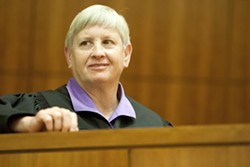 This was, after all, a celebration.

On June 14, current participants and graduates of the San Luis Obispo County Behavioral Health Treatment Court (BHTC) and the Adult Treatment Collaborative Court (ATCC) gathered in the County Board of Supervisors’ Chambers to share their stories of downward spirals arrested and reversed.

The potent combination of mental illness, substance abuse, and crime unsurprisingly often adds up to misery, miscommunication, and incarceration. Judges, however, sometimes have the option to refer cases to “treatment courts” like BHTC and ATCC. These probation courts—which screen participants—still require reformation and action, but they traffic in a more flexible type of justice.

“I think these courts are all about accountability and personal responsibility,” SLO Superior Court Judge Ginger Garrett—who played both host and moderator for the event—later told New Times. “There are consequences for slip-ups, but we always want to see people succeed.”

As the participants shared their harrowing stories at the graduation ceremony, they did so with pride and, most notably, did so in the past tense.

Mia, 34, talked about her long history of incarceration dating back to when she was 13, her bipolar disorder, her drug use, and learning how to live with mental illness.

“I never thought my story would have a positive ending,” she said. “That’s why excelling in this program is so exciting for me.”

The eight people who shared their stories ran the gamut in terms of race, age, ethnicity, and sex. Their addictions were wide-ranging too: everything from marijuana to methamphetamine, booze to Xanax. The two things they had in common were a history of mental illness and a fervent desire to improve their lives.

“Good people sometimes end up in the back of police cars,” Mia said.

Like many other social services programs, the treatment courts are ensnarled in the unceasing battle between state and county entities over a shrinking pool of resources. At a time when traditional prisons and courts are overcrowded and understaffed, it can be hard to justify allocating money to “alternative” justice systems.

In response to a funding question, Judge Garrett gestured to the eight speakers on the dais.

“Look at what happens when people get proper treatment and resources,” she said. “We have to make services like treatment courts available because, by and large, they work.”

In many cases, incarcerating someone who is mentally ill—though logistically simpler in the short term—is in reality far more expensive than processing them through a treatment court.

According to research compiled by the National Association of Drug Court Professionals, studies show reported returns ranging from around $2 to as high as $27 for every dollar invested in drug or treatment courts.

“The criminal justice system has traditionally been very black and white, but some situations with mental illness and drug addiction are more of a gray area, and should be treated as such,” Judge Garrett added.

Though some critics complain that treatment courts “cherry pick” participants who are easy to deal with, Damon Maggiore—program coordinator for the BHTC—said that is categorically false.

“Up here today, we have a man who had been homeless for 10 years and thought he could talk to ants, an older British man who was convinced he was a Navy SEAL, and someone who had been in [juvenile hall and, later, prison] since she was 13,” Maggiore said. “We take all the people who didn’t fit in anywhere else, and we are proud to intervene.”

Judge Garrett said the distilled mission of treatment courts like the BHTC is to ask: “What do you need to not do what you did ever again?”

As it happens, Garrett also has a personal reason for volunteering for treatment courts—which she does every year. Garrett said her mother struggled with severe depression her entire life, and she experienced the consequences growing up in that household.

“It can really impact families positively, and that’s why I fully support the program,” she said.

As if to prove her point, Rory, one of the treatment court graduates, had to excuse himself halfway through the discussion.

He had an appointment to enroll his child at Mission Prep.