Stand Strong recently put out an urgent call for donations to provide services to its significantly growing client base impacted during COVID-19 pandemic.

The local advocacy and resource group for those experiencing domestic violence released an impact report in November that tallied the number of individuals it helped from July 2019 to June 2020. The organization provided support services to 939 SLO County survivors of domestic violence and child abuse. Stand Strong served 870 clients during the same period from 2018-19. 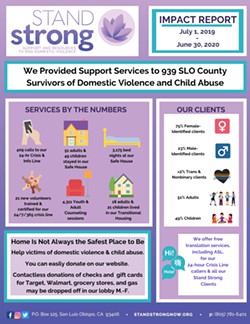 "The need to shelter at home has resulted in increased incidents of violence in the home as victims are trapped with their abusers without the ability to de-escalate or escape the conflict by leaving for safe places like school or work," Gresham said.

In order to prevent the spread of the virus, she said, individuals and families living with their abusers have been forced to quarantine in their homes.

Although services from the latest round restrictions have yet to be compiled and analyzed, Gresham said Stand Strong anticipates another increase in individuals or families seeking assistance. San Luis Obispo County Sheriff Ian Parkinson has stated publicly that since the onset of the pandemic, there has been an increase in calls to law enforcement reporting domestic violence.

Sheriff's Office spokesperson Tony Cipolla said that in the past nine months, there has been more than a 10 percent increase in calls, with the highest increase occurring in April, May, and July right after the first stay-at-home order. In March the number of calls rose by 1 percent and then drastically increased by 65 percent and 61 percent in April and May respectively.

New Times reached out to the county's Victim Witness Assistance Center but didn't receive a response before press time.

Gresham said Stand Strong has found that many of its clients are suffering financially as they have recently lost their jobs or other income resources due to economic shutdown caused by the pandemic.

"As a result, it is far more difficult for survivors to leave their abusers as they face economic barriers to accessing services and safe housing. Many of our clients also require additional financial assistance to afford basic necessities, such as food, transportation, and work uniforms if they are employed," she said.

In order to assist their clients, Stand Strong is asking for gift card donations for grocery stores, gas stations, and stores like Target and Walmart.

Gresham said the organization asks that contactless donations of gift cards and checks be dropped off in their secure lobby. Δ