When Kelly Stainbrook first started working as a bus driver for the Paso Robles Joint Unified School District nearly 25 years ago, the district had about 24 drivers on staff. By March of this year, that number had dwindled to 11. When COVID-19 hit and early safety mandates required government employees 65 and older to stay home, it fell even further to five. 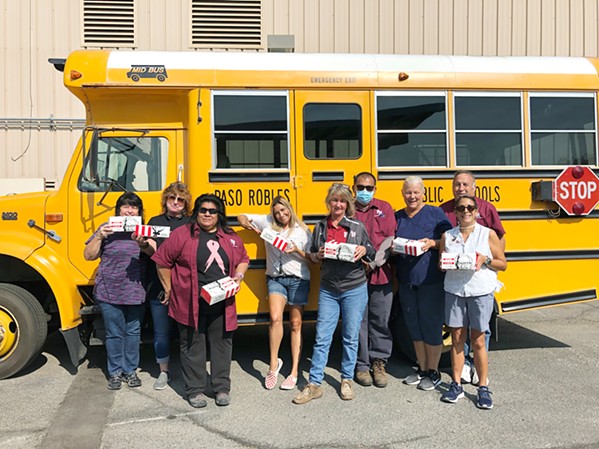 Stainbrook, now Paso's transportation operations and risk manager, said the deterioration of her team of drivers is the result of natural attrition over the years—some drivers moved away, others retired, and others were promoted up and out of their positions. Despite exhausting nearly every recruitment strategy she can think of, Stainbrook said she just hasn't been able to bring on enough drivers to work the district's two dozen bus routes.

Although the district has eight drivers working now, it's still not enough. Now, for the first time in decades—Stainbrook estimated since at least the 1950s—Paso Unified won't be offering transportation services to the roughly 1,200 to 1,300 general education students, some who live as far as Lake Nacimiento and San Miguel, who typically depend on the bus to get to school.

"It is not what the district wants to do," Stainbrook told New Times. "It's not what [Superintendent Curt Dubost] wants to do. But unfortunately you have to work with what you have."

A number of school districts throughout SLO County, many of which have plans to bring some students back for in-person learning in January, are grappling with a similar predicament. Guidance from the California Department of Education requires districts to reduce school bus seating capacity in order to maintain physical distancing between students, and at a Returning to School Safely webinar on Nov. 16, several local district leaders said such requirements are forcing them to make difficult decisions about which students get transportation.

San Luis Coastal Unified School District Superintendent Eric Prater said that under the current guidelines, a bus that would normally carry 84 students can only hold about 14. Without additional buses, drivers, and funding, there's really only room to bus the kids who most need it. Most districts, including Lucia Mar, San Miguel, San Luis Coastal, and Paso Unified, plan to transport only students with special needs who districts are required to bus. That means, Prater said, that a majority of the roughly 2,500 kids who depend on buses in San Luis Coastal will have to find another way to get to school until COVID-19 is under control.

"And this is, for working families, for single parents who live beyond walking distance to schools, this is a gut punch to those families," Prater said at the Nov. 16 webinar. "And I really, really am looking for solutions."

But Paso Unified's transportation problems started long before the COVID-19 pandemic and have only become increasingly dire because of it. Transportation Manager Stainbrook said she started the 2019-20 school year with 12 drivers and was using her substitute pool to supplement the lacking labor on a daily basis. That left her without anyone to fill in for drivers when they were actually sick or needed time off.

It just wasn't sustainable, Stainbrook said. In February of this year, about a month before schools closed due to COVID-19, Paso already had a plan to diminish its transportation services. So while other districts in SLO County will likely once again offer transportation services to their general education students when the COVID-19 pandemic is over, Stainbrook said it's not likely that Paso will.

But, she said, it's her goal to build the department back up to the capacity necessary to bus every student who needs it. School buses are the safest way for kids to get to school, she said, and they minimize traffic. Her drivers help instill a sense of independence and responsibility in the kids who ride their buses, and during the beginning of the pandemic, they delivered free meals to district families in need. The community needs school bus drivers, Stainbrook said, and Paso needs people willing to do the job.

"It's really rewarding," she said. "It's giving back to the community."