An outbreak of more than 15 residents and staff at the 40 Prado Homeless Center in San Luis Obispo has continued to grow—forcing the 70-bed shelter to close to outsiders at a time when it normally opens its doors as a warming center during inclement weather.

Community Action Partnership of SLO (CAPSLO) Deputy Director Grace McIntosh said that the outbreak, which started the week of Dec. 14, appears to be leveling off. Infected or vulnerable 40 Prado residents who don't need hospital care have been quarantining in motel rooms. 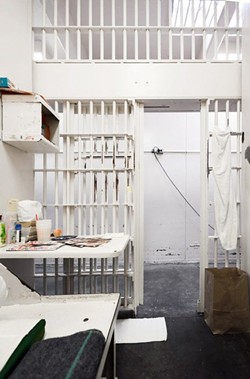 The shelter community is getting tested once per week by Public Health staff until all results come back negative. The most recent round of tests found a handful of new positive cases, McIntosh said.

"That only prolongs our ability to open back up," said McIntosh, concerned that those who are homeless will struggle to find shelter during a forecasted stretch of rain.

CAPSLO, which runs the shelter, is asking for donations from the community to help adequately staff 40 Prado during the health crisis.

At the SLO County jail, an outbreak that began on Dec. 10 has now grown to at least 20 inmates and seven correctional deputies. On Dec. 28, the SLO County Sheriff's Office reported that 15 inmates tested positive after Public Health tested 100 asymptomatic inmates. Two other inmates also tested positive during booking screenings.

"They are not linked to an outbreak in the jail," Sheriff's Office spokesperson Grace Norris said of the latter two inmates.

The Sheriff's Office stated in a press release that it will continue to isolate positive cases and test its jail population "until the outbreak is over."

In addition to 40 Prado and the jail, SLO County is also responding to multiple outbreaks at senior care centers and assisted living facilities. Public Health spokesperson Michelle Shoresman declined to provide specifics on which facilities are affected, but told New Times via email: "We continue to support a number of organizations and congregate care/living facilities with outbreaks throughout the county."

"Each time, our response is similar," Shoresman said. "We assist the facility with technical assistance and guidance on testing, contact tracing, isolation, and quarantine."

As of press time, SLO County had 2,245 active COVID-19 cases—the most since the start of the pandemic—with 58 hospitalized, 11 in ICUs, and 82 total deaths. Δ