A Motel 6 that was turned into emergency homeless shelter space and supportive housing in Paso Robles is one of several fast-paced and unconventional efforts to address homelessness on the Central Coast amid the COVID-19 pandemic. But it's one of the few that will remain when the pandemic is over.

While the coronavirus and resulting economic downturn have led to concerns about a spike in homelessness, it also generated a surge in federal and state dollars aimed at preventing the spread of COVID-19 among houseless populations.

Much of the funding is one-time and many of the resulting projects are temporary, but homeless advocates say coronavirus relief funding has offered opportunities to experiment with ideas that wouldn't otherwise be attainable. 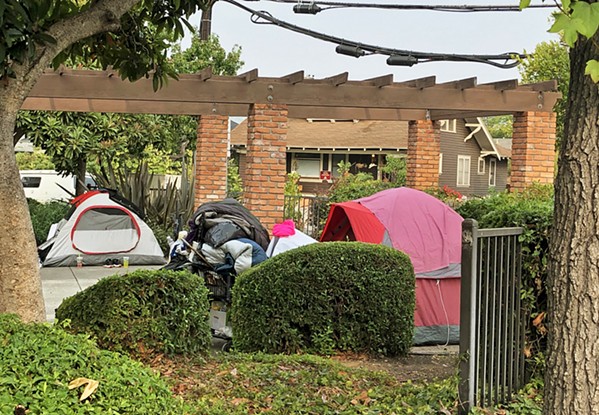 "I just hope that there will be a lot of creative approaches to address the needs of our houseless neighbors and that that would be able to trickle into post-COVID," said Sylvia Barnard, executive director of the Good Samaritan Shelter, a Santa Maria-based nonprofit that offers a number of homeless support services.

When Santa Maria's existing shelter capacity was reduced by about half for the sake of physical distancing, Barnard said Good Samaritan used emergency funding to create pop-up shelters at Santa Maria High School and the Atkinson Community Center.

Barnard said she'd read about a similar tiny home village in Southern California and loved the concept, which works around the challenges in addressing homelessness amid the pandemic.

"I think specifically the pallet shelter project is one that is really unique," Barnard said, "and it's an interesting response to the growing encampments that we have across Santa Barbara County and the nation as well."

Gina Fischer is a district representative and scheduler for Santa Barbara County 3rd District Supervisor Joan Hartmann, whose district encompasses Isla Vista. Fischer said the Isla Vista area is home to about 40 chronically homeless individuals who are pretty established in the community, but COVID-19 led to a noticeable influx in Isla Vista's houseless community and homeless encampments in local parks.

Fischer said the pallet houses were up and running in Isla Vista just a month after the project was approved in November 2020 and will be there until the funding expires in June.

Operated by the Good Samaritan Shelter, the pallet houses are geared toward getting Isla Vista residents back into healthy routines and eventually permanent housing, Fischer said. Participants are provided a clean space, meals, and showers, and they are connected with housing, rehabilitation, and medical services on-site.

Of the roughly two dozen pallet-home residents so far, Fischer said 90 percent had no identification when they moved in, documentation necessary to get jobs and housing. Since they moved in, five have obtained jobs, several are attending court dates, five are working through sobriety programs, and some have received needed medical attention.

"So it really has been an opportunity to stabilize their lives so that they are ready to be housing-ready," Fischer said.

But homeless advocates often complain that there isn't enough being done for those who aren't ready to transition into permanent housing or even shelter life—those who live in homeless camps. San Luis Obispo County resident Paul Andreano said little has been done on that front locally even with all the extra pandemic funding. Andreano is a volunteer with Hope's Village of SLO, a nonprofit that advocates for people experiencing homelessness. He said SLO County's biggest problem is the number of "existing unconventional solutions that we aren't trying out."

"Unfortunately I feel like there's all kinds of other options out there that have already been proven out in other localities, and for whatever reason we're not engaging in those at this point," he said.

In early February, SLO County received about $5.5 million in COVID-19 relief funding, which it distributed with an earlier allocation to nonprofits working with houseless populations. The El Camino Homeless Organization, Peoples' Self-Help Housing, and the Housing Authority of San Luis Obispo also partnered to use $15 million worth of state Project Homekey grant funding to transform a Motel 6 in Paso Robles into an emergency homeless shelter with permanent supportive housing built in.

Although Andreano described Paso's Motel 6 project as "beyond frickin' cool," he said SLO County has the funds to launch smaller-scale efforts that could make a big difference.

He pointed to the county's now defunct safe parking program, which allowed homeless individuals to park and sleep in their cars overnight at several parking lots throughout the county at the beginning of the pandemic. Andreano considered that program to be successful, but it ended as planned in June 2020 when funding ran out. He'd like to see the county launch a new parking program alongside a camping area with dumpsters and bathrooms.

While Andreano said he agrees that homeless camps are problematic from a sanitation and environmental standpoint, he said SLO city's typical response is a waste of time and resources. For every homeless camp the city clears out, another is reborn elsewhere. If people had a designated place to camp, park, and deal with their waste, the city would have more time and energy to begin addressing the root causes of homelessness.

"But there's this mentality in SLO, I think, that whenever you do something like that you're kind of aiding and abetting the homeless people," Andreano said.

Paso launched a designated campsite for homeless people in July 2020 when the city decided to clear out illegal camps in the Salinas Riverbed, but it ended months later without much success.

Waste and trash had built up in the Salinas encampments, and fires were becoming a regular occurrence, but Community Services Department Director Julie Dahlen said the city couldn't legally relocate riverbed residents during the pandemic without providing some other residency option. Paso didn't have a homeless shelter at that time, so the city roped off an area for camping at Borkey Flats.

"None of us frankly were extremely satisfied with that as an alternative," Dahlen said.

It took about $11,500 to set the camp up and $20,000 a month to run it, and Dahlen said it ended on Oct. 31, 2020, as planned. Attendance never exceeded 15 campers a night, she said, and frequently fell below that. Dahlen said chronic homelessness is a complex problem that'll take the whole community and a lot of experimenting to fix.

"We're all trying to find the best answer," she said. Δ