Black and white framed photos of cowboys and cattle hang above the comfy booths at ON Bar in Paso Robles.

"These are all local branding photos of our ranching community," Mattson says, adding that Steve Nino, among other area ranchers, can be spotted throughout the photo set. "For the weekend, you might go brand someone's cattle out in Cuyama, and everyone shows up to help, even the kids. The next weekend, they'll brand your ranch in Paso Robles. The ranching community here is really close."

From the well-worn branding irons dangling from the walls to the Waylon Jennings song crooning over the juke to the din of clinking glassware, ON Bar has one boot firmly rooted in cabernet sauvignon and the other in cattle.

Seafood? Yes. Wine? Yes. Steaks? Oh heck yeah (Nino is picky about his meats, and so are his customers).

The restaurant is an homage to Nino's cattle ranching grandfather, Oliver Nino. A true Cattleman, Oliver would probably be proud of this place. This is no fussy white tablecloth affair, but the steaks are treated like celebrities.

"ON Bar actually stands for 'Oliver Nino,' and it's been the family cattle brand for the past 95 years," Mattson says. "That's why it's the first thing you see when you walk through the door."

Yes, you will spot the large "ON Bar" brand clear as day as you stroll into this long beloved Mission inspired space, the second restaurant Nino has opened in the past few years. (He also owns family friendly barbecue joint Nino's Grill, located in his nearby stomping grounds of Templeton.)

If you're a Paso Robles local or just a fan of farm fresh early California cuisine, you've probably spent time here. Villa Creek opened in the location some 18 years ago, and whispers of this legacy will probably always remain.

Still, Mattson says that after months closed to the public, the community was "ready" to get back into the booths and to try the new offerings. 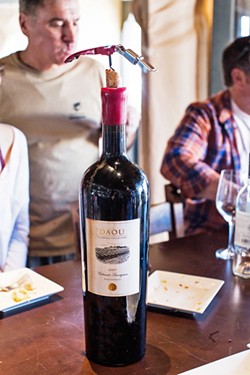 Although a quick lunch is a great option, Mattson says you must come for dinner if you want the full ON Bar experience. Lingering over a meaty mouthful with a bottle of local red—could there be anything more old-school Paso?

Let the people south of the grade "go vegan" and gluten free. Here, it's all about bloody plates and browned, beefy bits.

"Our New York steak and prime rib are doing amazingly well," Mattson says of the local response. "You don't have to season prime as much. All the fat does its own seasoning. You're really getting that true steak flavor."

Farm-to-table this is not, yet you'll still get that upscale vibe (especially while chilling on that killer patio looking out over the heart of Paso Robles—not a bad spot to dig into a small plate of spring rolls and a mint julep).

I nibbled on two lunchtime appetizers that felt light and fresh on a weekday midmorning: a pretty tower stacked high with snow crab, mango, and avocado (served with house-made chips) and an order of tangy ahi wantons with red cabbage, micro cilantro, and wasabi dressing.

As she likes to assure to naysayers, "People that eat steak really like their steak, and we get that. We knew we had to make it good. We did."

Hayley Thomas Cain likes her steak rarer than rare. She can be reached at hthomas@newtimesslo.com.